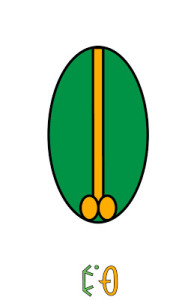 In the Astroshamanic Binary System, Sun in Libra (7) and Moon in Cancer (4) constitute Binary 7.4, or Binary number 76.

7.4 integrates cardinal Air and cardinal Water, blending Libra’s justice, mildness, elegance and harmony with Cancer’s sensitivity, nurturing spirit and passion. 7.4 folks have a natural capacity to align with the needs and desires of groups and the public in general, enabling them to supply the best in most situations. 7.4 radiates a natural attention and sensitivity to its close environment and relationships, together with an attitude of respect and adaptability to their needs and visions. Grievances relate with a tendency to invest excessive energies in close relationships, which may lead to spaces of painful vulnerability, dysfunctional romanticism, sentimentality and emotional neediness.

Libra and Cancer are in a square (90°) aspect. They are both cardinal signs, holding a direction and seasonal gateway, West and South, Autumn and Summer respectively. They share the power to initiate changes and the related enterprises, though their energy works at cross-purposes and this can cause some significant friction. In ordinary terms these signs appear hard to integrate due to the tension they generate, and yet this same tension can provide the massive force needed for achieving most significant objectives.

All the luminous and loving episodes of any relationship you have had in your life continue to exist in the present at all times, no matter how old they are and regardless of any unpleasant experience you may have had in those same relationships. As you acknowledge the luminous episodes, they return to life. If you can retrieve their memory at any time, those moments will always be with you. The fact of whether you are physically in those relationships or not is completely irrelevant. What counts is your capacity to treasure any luminous relationship, no matter how long it lasts, or whether it is past or present. Authentic relationships are not bound by time. You are not the victim of time. By selecting and holding the memories you value in time you lay the foundations for your future memories. (FS)

Astroshamanic Seal: a vertical line with two small oval shapes below, all within a large oval shape. This seal involves radical shifts of polarities, so that what is commonly identified as feminine takes up a male nature, and vice versa. The release here entails letting go of fixed gender associations, as well as of the conflict between polarities, through the unveiling of the third party. The access to the multidimensional gateways is impossible unless the hallucination of the binary system is unveiled and released. Since human beings are tenaciously blocked in the binary system, any attempt to include a trine system is inevitably redirected to the binary system. In order to dodge this block, Handor and the forces of Light have devised a plan, which is exemplified by the Sacred Cone Circle. All previous attempts to release the block of the binary system and to add the remaining 10 elements have failed since the binary system has always prevailed. According to the plan, in order to proceed to the 12-sector system it is essential to completely release the binary system by letting go of the foundations this block has generated since it was activated.

For this purpose, since human life is based on the binary system, it is necessary to employ a release process based on the binary. Its function is to invert the polarity of the binary system and to activate a double channel of exchange. The tool used for this purpose is the Sacred Cone…The polarity of Earth (female) and Sky (male) preserve the hallucination. As a result the light that the Sky sends to the Earth is converted in darkness. The shift of polarity forces the Earth to send darkness to the Sky, hence releasing its darkness. Operating the Sacred Cone and its double channel is meant to complete the Game of Light and Darkness and to activate the 12-sector system through the use of the binary system itself…” “It is necessary to invert the polarity. Mother Earth is tired of playing the role of the mother. For ages it has received the white light seed of the Sky in her dark womb, generating beings of Darkness. She would like to have some experience about how to be a father. At the same time Father Sky is fed up of shedding his seed and penetrating the Earth, and would like to be penetrated and receive her seed.” In the release process it is essential to shift the sexual roles to Mother Sky and Father Earth. In this way Father Earth provides his seed of darkness to Mother Sky, which will then generate beings of Light. Allow the Earth to become Father and the Sky to become Mother. Non true change is possible unless this shift is acknowledged. This is the only way of honouring the Earth: liberating it from its role of suffering mother and allowing it to release its dark seeds into the stellar womb of the true Mother, who is the Sky. This will provide balance, and the balance is accomplished now by shifting the roles.

Günter Grass, 7.4.7 (16 October 1927) German writer, Nobel Prize laureate, best known for his first novel, The Tin Drum (1959), a key text in European magic realism, and the first part of his Danzig Trilogy, which also includes Cat and Mouse and Dog Years. “Granted: I AM an inmate of a mental hospital; my keeper is watching me, he never lets me out of his sight; there’s a peep-hole in the door, and my keeper’s eye is the shade of brown that can never see through a blue-eyed type like me.” “Today I know that all things are watching, that nothing goes unseen, that even wallpaper has a better memory than human beings.”  (The Tin Drum)

Henri-Louis Bergson, 7.4 (18 October 1859 – 4 January 1941) French philosopher, influential especially in the first half of the 20th century. Bergson convinced many thinkers that immediate experience and intuition are more significant than rationalism and science for understanding reality. “The present contains nothing more than the past, and what is found in the effect was already in the cause.”
Jerome Bruner, 7.4 (October 1, 1915) American cognitive psychologist. “The Narrative Construction of Reality”, article, the mind structures its sense of reality using mediation through “cultural products, like language and other symbolic systems”. Narrative is one of these cultural products.
Annie Besant, 7.4.1 (Clapham, London October 1, 1847 – Adyar, India September 20, 1933) prominent Theosophist, women’s rights activist, writer and orator.
Étienne Bonnot de Condillac, (7.4) French philosopher (30 September 1715 – 3 August 1780)