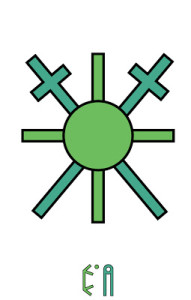 In the Astroshamanic Binary System, Sun in Libra (7) and Moon in Scorpio (8) constitute Binary 7.8, or Binary number 80.

7.8 is a blend of cardinal Air and fixed Water. This pattern mixes Libra’s balance, gentleness, harmony and diplomacy with Scorpio’s intensity, passion and ultimate transformation.

Those who resonate with this combination can delve into the most abysmal and extreme life situations, while at the same time easily manage to retrieve balance and lightness. 7.8 can show a docile, compromising and accommodating attitude, shrouding a most passionate and forceful nature underneath. Its typical inclination promotes the refinement and channelling of strong emotions into artistic and aesthetic forms.

On an energetic level this binary may operate both as powerful booster and ruthless reaper of relationships. It promotes release to attachments based on fear and separation, through the test of death or sex, while opening up to extraordinary opportunities residing beyond ordinary human perception. A significant feature of 7.8 is that of enabling access to the hidden agenda of human relationships.

Qualities: endurance, devotion and commitment towards relationships, partnerships, agreements and visions, with the capacity and courage to move into difficult shadow areas and situations of extreme crisis. Detachment, impartiality, balance and fairness when facing decisions or providing guidance and support. Capacity to detect hidden or denied elements behind bogus situations of harmony and wellbeing. releasing and transforming such grievances, with an attitude of lightness and mutual cooperation or involvement.

Grievances: concern for personal, individual gain and gratification, hidden and manipulative agendas masked by bogus harmonious and loving attitudes and communication. Mistrust and obsession for true motivations and shadow elements of others.

Astroshamanic Seal: a circle and a cross with two crossed-swords. The seal portrays the following guidance and vision:

A couple gathers in the healing circle, one in Sector 7 and the other in Sector 8. From those points they express and acknowledge their grievances. They realise that grievances (Graha) deeply long to be exposed in the circle in the presence of witnesses. A council follows in which the Guides of each partner have the floor with the aim of releasing hidden agendas.

A couple sits in two different points of the circle, then the stage curtain rises, unveiling a gateway accessing a new dimension. In that reality, which the preceding environment, as a guardian, was hiding, weird animals and landscapes appear. They are the basic Graha.

“You are channels and this is your only function. Releasing grievances, operating the Sacred Cone, is about being channels, It is not about talking about this function, it is about silently and pragmatically implementing it. You are called to do so because this is part of your structure. You can do it consciously or unconsciously: the choice is yours. The glyph of this binary allows you to access the hidden agendas of relationships, which are either aimed at unity or separation.”

Hal Duncan, 7.8 (21 October 1971) Scottish fantasy writer.  Vellum – The Book of All Hours is about a war between Heaven and Hell fought in a reality of which Earth is only a fragment; in this reality, called Vellum, live the Unkin (Angels and Demons). The events in the novel are described in a non-linear order, with several skips ahead and back in time. The story of the characters is linked to the Sumerian myth of Inanna and her descent to the underworld and to Aeschylus’s tragedy Prometheus Bound. Other books: An A-Z of the Fantastic City (2012). “We are our own worst enemies. How banal and trite that sounds, but […] have come to believe that all the greatest truths are trite and banal, when spoken aloud in their simplest and most honest terms. Perhaps they can only be imparted in the Cant, in a language which writes itself onto your heart so that you understand not just the words but all the shattering ramifications of of a sentence which, when heard without true understanding, seems quite risibly simplistic. We are our own worst enemies. People die.”

S. M. Stirling, 7.8 (September 30, 1953, Metz, France) French-Canadian science fiction and fantasy author, best known for his Draka series of alternate history novels and the time travel/alternate history Nantucket series and Emberverse series. “It is easy to kill. It is equally easy to destroy glass windows. Any fool can do either. Why is it only the wise who perceive that it is wisdom to let live, when even lunatics can sometimes understand that it is better to open a window than to smash the glass?” (The Scourge of God) “Manure grew the fodder for the cow that made that ice cream and fertilized the beets that gave us the sugar, my girl,” Juniper said sternly. “Earth must be fed or we all go hungry.” (The Protector’s War).

The SCP is in the Rila Mountains close to the Rila Monastery and next to the Kidney Lake, one of the Seven Rila Lakes. The circle right of the lake indicate the exact point. It is used for Paneurhythmy, a method/dance offered by Peter Deunov (the Master Beinsá Dunó), with Sun in Cancer and Moon in Libra (4.7), Saturn Vessel (Saturn conjunct Moon), who established a Christian Esoteric School of the Universal White Brotherhood in Bulgaria. Paneurhythmy is danced in pairs forming a circle – there may be more than one concentric circle if necessary. One person of the pair represents the masculine principle; the other one represents the feminine principle. The musicians (and choir, if there is one) are in the center of the circle. The participants move in a counter-clockwisedirection while performing the dance. The dances are often practised in the Rila Mountains by the Seven Rila Lakes.

This nation, located in the area Centre-West of the State of Tanmariat, is most notorious for it was once and, should you get to Tabadesh in a dysfunctional frame of time, it can still be a major Graha proliferation zone. Handorians are not used to employ swear words, yet if they were, the saying “Go to Abades!” would surely be one of the direst insults.

What emerged in Tabadesh appeared as the most staggering Graha a mind could conceive. This is absolutely baffling for in Tanmariat and in all the remaining Handorian States, apart from Frian, there are supposed to be no Graha. At least, this is the official version, as it is also the legitimate account that the presence of Graha in Tabadesh is merely a postulation resulting from the multifarious dynamics of the Game. A similar situation applies to the Nation of Herotlant (8.7) in the State of Frian.

The binaries 7.8 and 8.7 are most controversial for they evoke what is probably the cruellest episode ever occurred in the Handorian scenario: the heinous rapport between Frian and Tanmariat. Hence, working with 7.8 involves coming to terms with the innermost wound in the Libra sphere of relationships.

Please bear in mind here that in the current Handorian setting recollections of this wound are most likely merely available in the Tabadeshian National Archives and in the Franandarg, the colossal documentation centre of the Handorian States System. Paradoxically Tabadesh is at present (version 3.3) a most popular and trendy resort for multi-dimensional honey-moons. Yet please be aware that relationships in Handor have nothing to do with those on Earth,

Handorian do not relate between each other, for the acknowledgment of their unity is substantially grounded in their belief system and experience. They relate with what could be most precariously described as the Handorian Spirit, and its expression at a State, National and in version 3.3 also ternary level.

I prefer to keep the whole topic of Tabadesh still cryptic.