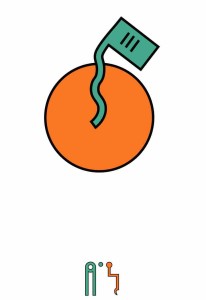 “Pain is real when you get other people to believe in it. If no one believes in it but you, your pain is madness or hysteria.” (Naomi Wolf)

In the Astroshamanic Binary System, Sun in Scorpio (8) and Moon in Gemini (3) constitute Binary 8.3, or Binary number 87.

8.3: a mix of Fixed Water and Mutable Air, integrating Scorpio’s passion and magnetism with Gemini’s flexibility and communication. These folks can be very popular and charismatic, with strong mental capabilities and the ability to go into intense depths or dramas and easily get out of them.

Scorpio and Gemini are in quincunx aspect, an angle of 150°, which is five-twelfths of the 360°. This aspect tend to cause slides into parallel universes affecting what happens in everyday reality. In this case the signs involved are  strikingly different as they express in ordinary reality, which allows them to function at their best in out of the ordinary contexts, such as shamanic work, multidimensional voyages, and also conspiracies, espionage, secret services, etc.

The phase of Full Moon begins two days before and ends two days after exact Full Moon or opposition (180°) of Moon to Sun, hence it also encompasses the quincunx (150°) when the Sun is in Scorpio and the Moon in Gemini. This is the final stage of the Full Moon leading to the next phase, the Disseminating Moon. The Full Moon is an active and highly charged moment. It represents the apex of the lunar cycle. Its function is to bring balance. The aim of the final part of the Full Moon as it moves in Gemini, is to allow this balance to take place by deep and uncompromising release of pent-up emotions,  which can more easily be liberated through spoken or written forms of communication. It is essential at this stage to be aware that what is released is collective, ancestral energy, which can only be liberated if you let go of any personal identification.

Astroshamanic Seal: a circle connected at its core by an undulated line leading to    a written sheet. This seal promotes the capacity to express most hidden feelings and controversial information through ordinary forms of communication, such as language, photograph, videos, etc. It is also ideal for releasing excesses amounts of information accumulated through exposures to media and the internet. It promotes the capacity to accept deep states of consciousness and also being able to integrate in everyday life, especially through written or verbal communication.

Fyodor Dostoyevsky (8.3.9) (November 11, 1821 – February 9, 1881) Russian writer of novels, short stories and essays, best known for his novels Crime and Punishment, The Idiot and The Brothers Karamazov. Dostoyevsky’s literary works explored human psychology in the troubled political, social and spiritual context of 19th-century Russian society. Considered by many as a founder or precursor of 20th-century existentialism, Dostoyevsky wrote, with the embittered voice of the anonymous “underground man”, Notes from Underground (1864), which was called the “best overture for existentialism ever written” by Walter Kaufmann.
The awful thing is that beauty is mysterious as well as terrible. God and the devil are fighting there and the battlefield is the heart of man.
The greatest happiness is to know the source of unhappiness.
The cleverest of all, in my opinion, is the man who calls himself a fool at least once a month.
Power is given only to those who dare to lower themselves and pick it up. Only one thing matters, one thing; to be able to dare!
Man is unhappy because he doesn’t know he’s happy. If anyone finds out he’ll become happy at once.
The darker the night, the brighter the stars, The deeper the grief, the closer is God!

Auguste Rodin, (Sun in Scorpio, Moon in Gemini, Ascendant in Capricorn: 8.3.10) French sculptor (12 November 1840-d. 1917) Auguste Rodin: born on 12 November 1840 in Paris with Sun in Scorpio, Moon in Gemini and Ascendant in Capricorn (8.3.10), Rodin is one of the most famous modern sculptors. For 37 years he worked with Capricornian zeal on his monumental sculptural group The Gates of Hell, which depicts scenes from Dante’s Inferno. “Anybody can look at a pretty girl and see a pretty girl. An artist can look at a pretty girl and see the old woman she will become. A better artist can look at an old woman and see the pretty girl that she used to be. But a great artist–a master–and that is what Auguste Rodin was–can look at an old woman, portray her exactly as she is . . . and force the viewer to see the pretty girl she used to be . . . and more than that, he can make anyone with the sensitivity of an armadillo, or even you, see that this lovely young girl is still alive, not old and ugly at all, but simply prisoned inside her ruined body.” (Robert A. Heinlein, Stranger in a Strange Land)

Naomi Wolf, (8.3) born 12 November 1962, American author, former political consultant, later described as the third wave of the feminist movement. In The Beauty Myth a best seller in 1991, she posits that “beauty” as a normative value is entirely socially constructed, and that the patriarchy determines the content of that construction with the goal of reproducing its own hegemony. In Vagina: A New Biograph (2012), she argues that freedom can be accomplished by the capacity of human beings to release themselves through the vagina. “Pain is real when you get other people to believe in it. If no one believes in it but you, your pain is madness or hysteria.”

Keith Emerson: (8.3.4) born on 2 November 1944 in Todmorden (England), Keith Emerson has Sun in Scorpio, Moon in Gemini and Ascendant in Cancer).  Keyboard player and composer, he was part of Emerson Lake and Palmer (ELP), one of the major supergroups of the 70s. He is known for his outrageous stage performances, which included using knives to hold down organ keys, playing the organ upside down and having it over him or rotating the piano while playing. Among his mythic albums: Pictures at an Exhibition, Tarkus, Brain Salad Surgery, Lucky Man.

Guidance:
Induction Programme: 291096 – 8.3
“Give space to an unrestrained urge to write, moving first into the Vertical Hub of the Core Template Sphere and then shifting into Sector 3 to do the writing. Continue as long as it is needed and until you have written all that you can, even exceeding your limits and reaching a point of extreme tiredness. Then lie down in bed or in a warm environment, enter the Vertical Hub of the Core Template Sphere, use the chant of 8.3 for three times, place your hands below your head and gently rock it for a few minutes, then place your right hand on your genitals and your left hand on your head.  At this stage you can fall asleep and move into the dream-world, or remain still in still in such a position. You can release this position, if this occurs spontaneously, yet in case you experience agitation or grievances, return to the previous arrangement. Upon waking up or, in case you don’t fall asleep, after at least 15 minutes, yet preferably more, get up and write what has happened.”

Binary Programme 1 – Pahekarubhe 1: 051198 – 8.3
051198: Allow your writings to be reduced. Allow information to move freely and fast. There are many books in your garden. Allow to work with lightness and ease. With this binary secrets find their expression. Glide through the expression because you have us as a Guide. You are only a periscope and you only need to say what you see. Do not be concerned about what abides in the depth of the sea. There all is darkness, yet you can allow darkness to see what is happening in the surface. You provide the information that allows us to lead the earth. You spread the information that comes from us, people of Quiumakai, those who walk under your feet.
In the cave there are some birds, merrily twittering and flying. They settle near the external exit, waiting for something. One of them brings the potion.
A submarine moves very fats, then it stops. Some beings emerge from the submarine showing books and newspapers. We bring news from below and we are with you in your intent of letting them out. We have these books and pages, and give them to you, so that you can spread them. Create many books, if this is pleasing to you. You can become the editor of a series. I ask support to the binary so as to allow what abides below to find expression. I take the books and bring them to the puplisher, who publishes them.