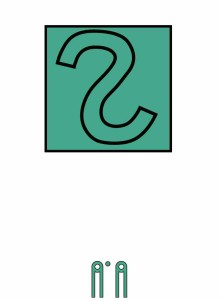 8.8 is a pattern that amplifies all major Scorpio features, generating most passionate, determined, secretive, powerful and magnetic energies. This binary promotes massive resolution and endurance aimed at focused intentions and processes, which may not be easily grasped from an ordinary perspective. Passion is expressed with intensity covering climaxes of both levity and gravity, together with a sense of authority firmly grounded into a deep awareness of what lies beneath conventional awareness.

The New Moon in Scorpio is a precious opportunity to feel and acknowledge our deepest fears and shadows, allowing them to lead us to a truly authentic renewal of our soul.

A New Moon in Scorpio is a climax of darkness and intensity, a peak of fermentation and composting, so that whatever is initiated during this time can receive the maximum level of fertilisation.

If we are open to release control and attachment to our limited perspective of life, accepting the awareness of death and shadow emotions, this New Moon can draw from ancient fertile roots, strengthening the foundations for the manifestation of unexpected possibilities and most luminous developments.

The days preceding any New Moon traditionally involve a confrontation with release and death of the old cycle, as well as the shape-shifting into another cycle. Since the New Moon is in Scorpio, coupled with an eclipse, the elements of death and transformation reach their deepest climax.

The New Moon is generally regarded an ideal time to explore  our connection with Spirit, or All That Is. This also involves inquiring about the way we relate with It, finding out if our connection has become impaired and, if this is the case, how and why.

On a New Moon some of us may experience a glowing sense of melancholy. At the same time, it may be common to discern the caring company of healing spirits, together with the challenge of accepting their presence. This may bring the anxiety of experiencing the luminous side, knowing that it will draw the dark side.

Experiencing darkness is part of the process of bringing light, as long as this does not lead into polarity and conflict with either darkness or light. Once light is brought into the darkness, then there is no more darkness.

This reveals a totally new landscape, where fear, terror and other grievances are transmuted into love, joy and ultimately unity.

Once the relationship with Spirit moves beyond the nurturing and initiatory level, it inescapably involves the unveiling of the dark side.

Darkness is the other side of Spirit. This is what you regularly find out when the honeymoon is over. Just like the night follows the day, darkness comes after light.

Since on a New Moon the Sun and the Moon are both in conjunction, there is potential to experience idyllic moments of unity. On such occasions you may feel the presence of Spirit so strongly, yet there may also be so much sadness, despair and fear.

Where does it come from? Why do you feel so miserable? What have you done? What has been done to you?

The answer you receive from Spirit is that this is part of the healing work. It implies becoming aware that gloomy feelings are the dark side of Spirit. This is the part that, once accepted, can lead you into the authentic experience of unity. It comes to you whenever you have blissful luminous experiences. It arrives in the form of fear and other grievances. It brings death and rebirth. Yet this death is not opposed to life. It is the denied side of life, the secret lover that in your bravest dreams you crave to reunite with.

Consensus reality provides a provisional relief and sense of unity. You are grateful for its compassionate support. Yet there is an expiry date. Although it can be denied and postponed, the confrontation with the dark side is inevitable.

From a multidimensional perspective, you perceive yourself as being in a hallucination based on polarity. Here everything appears confrontational and predatory. This is the obvious result of separation. You perceive yourself as separated and therefore you need to defend your separated bit. You defend yourself from whatever can threat the fragmented identity that you believe to be. You protect yourself from other people,  environmental conditions, illnesses and any apparent adversity.

This is a forlorn war, since in the end your fragmented bit will succumb. Holistic healing involves acknowledging, retrieving and incorporating the fragmented parts, which are basically those that your separated self is at war with or terrified of.

During the New Moon there is a temporary crisis in the motivation to fight the polarity war. Since the Sun and Moon are united, the reality based on separation temporarily falls apart. For the fragmented identity it is a most dramatic event and death, whereas from the healing perspective it is the gateway to ecstasy.

On a New Moon the game of separation suffers an inexorable crisis. The two polarities are at one. If we have started the previous cycle with a healing Intent, this is the moment when we gather all the pieces we have retrieved and put them together.

The separated parts die and are reborn into a unified part. The perception of such an event changes according to separation or unity. This is what causes such contradictory feelings. It is also a solitary process, death and rebirth. This is a paradox for, although this is happening to everyone, you seem to be the only one who dies.

Please be aware that you are not alone. Death and life blend themselves on a New Moon. The secret is unveiled. Here I face the opportunity to start a new cycle based on healing. Here I can release the temptation to fight another war.

Let’s employ whatever we experience on this New Moon as fertiliser for healing Intentions.

Let’s be united both in our misery and bliss. Let’s prepare and adorn the wedding chamber for the ecstatic encounter of the two polarities.

Astroshamanic Seal:  an inverted “S” shape within a square. This seal supports the apex of release and forgiveness. It implies unbending focus on letting go of grievances, with the firm awareness that no interaction with grievances and emotions is possible, apart from their unconditional release. The purpose of horizontal relationships is to generate grievances. The seal firmly aligns those grievances to the vertical axis.

Ella Wheeler Wilcox, (8.8.7; Saturn Branch) American author and poet (5 November 1850-d. 1919), Poems of Passion. Her most enduring work was “Solitude”, with the lines: “Laugh, and the world laughs with you; Weep, and you weep alone”. “A weed is but an unloved flower.” “In time the earth will be inhabited by almost god-like beings who shall analyze and discuss the remnants of humanity as we now discuss the chimpanzee.” 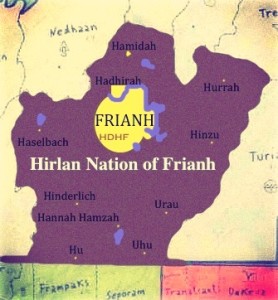 Frianh is the dominant nation of the 12 nations of the United Nations of Hirlan. This nation – together with Uturiano (8.2), Hurzand (8.4), Ukobarn (8.1) and Utrimanic (8.3) – is part of the original territory of the State of Friaan, which later developed as the largest State of the Handorian State System. The capital (Frian) is also the second largest metropolis in the Handorian States System. Its main features are 12 huge black pyramids surrounding the Ur Frianh, a colossal conic structure. Most of Frianh is developed under level 0 and with the exclusion of Frian City (comprising the 12 pyramids and Ur Frian) and the districts of Hierarch and Hearh, the majority of buildings are low compared to other Handorian centres, though they develop considerably below level 0. Since version 3.2 Frianh hosts the Handorian District of Handor Frianh, an auxiliary emanation of the Treka.
8-8-1 Hannah Hamzah, Handelsbrauch
8-8-2 Hu
8-8-3 Uhu
8-8-4 Urau, Ubah, Huhu, Umah
8-8-5 Urach, Halah, Hinzu, Horch
8-8-6 Hurrah,  Hitesh, Hafsah, Ulrich, Unmesh, Hierzu
8-8-7 Hamidah, Hanifah, Habibah, Halimah, Hasmukh, Udghosh, Upakash, Hautnah, Hasinah, Ubaidah
8-8-8 Hadhirah, Heinrich, Hudhafah, Hellgrau, Unterbau
8-8-9 Haselbach
8-8-10 Hinderlich
8-8-11 Herrentisch
8-8-12  Haselstrauch

as I wander through the valley of skeletons,

I am reminded of your redeeming glory,

as I abstain from any interaction with Graha,

hence blessing them in their original promise,

what the Pioneers sheltered in their hearts,

Guidance
Induction Programme-111196-8.8:
Weird beings speak in a way that does not make any sense. I am swept away by the stream and I see strange objects moving around. As I dream I remember to look at my hands. I see them with totality and a door begins to open. Very strong images appear. I call the Guides and Volfa. Then I become aware that someone is coming in the ordinary reality: it is my father, who turns on the light. I tell him to go away because I am doing a practice in darkness. I return to ordinary reality.

Pahekarubhe 1: PR – 181198-8.8:
Celebration of the death ritual in Quiumakai with the presence of the complete assembly. Through the potion I revisited the scene of the valley of the skeletons and I was reminded about my power to transform all this in miracles. It is about sending Graha, releasing them and employing them to manifest the Intent. No interaction with Graha is possible apart from their release. This means being silent, avoid interaction and release the temptation to see grievances as real. It is about being blind about them. It is in relationships that Graha thrives, and it is necessary to operate on the related Graha.