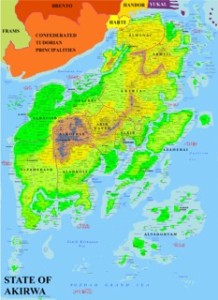 Akirwa (Yawrik in Rodnah), officially Akirway Rahn Etna, Handorian State in the central southern area, bordered on the north by the State of Hartem; on the east by the Handorian Sea; on the south by the Pozdahian Grand Sea and on the west by the Hartemian Sea. It comprises, in addition to the Kirway peninsular mainland, the Azaréhai islands, the Alsadorvam islands, the Nelfras islands, the West Armeilan Archipelago, the Nalparchipelago, Alphard, Anat and other lesser islands. The area of the country is 1,981,110 sq km. The State capital and largest city is Al Kirware, located on the east coast in the centre of Kirway.
Most of Akirwa is a huge peninsula, comprising an elevated and rugged plateau in the south and centre, two desert depressions in the north and south, a series of dry valleys and major mountain ranges (Alkofrak Ranges, Akirian Ranges, Nahechoa Ranges) containing the highest peaks of the peninsula. The Northern Alrafiab peninsula is low, flat and abundant in vegetation.
Akirwa is mainly a military state, comprising huge military and nomadic settlements, also including major cities and metropolitan centres.
The State official languages are Handorian and Kirwayran. Prominent national variations of Kirvayran are Alsadorvayran, Azareian and Alkofrakian.
The highest authority of the State of Akirwa is the most notable, fervent and amorously heinous Kirwayan hero, known as The Akir. The ruling authority is the Akirwa El Suprah Sangah Pahle Etnaies (a council of 24 members, comprising 12 Akirvayran National Sovereign Commandants and 12 State High Commanders) headed by the Kirvay Al Trinah (the Akir, the Akirwa Al Sangah Pravikara, and the Akirwa Rahk Apunya High Marshal). The Akirwa El Sangah Jenah Etnaies, the general assembly of the State representatives has 144 members.
Akirwa is divided, according to the classic Handorian system, into a State Capital Territory and 12 Nations. Below the national level, Akirwa has a pyramidal ruling and administrative system. In descending order of importance are Trinities (144), Squares (1728), Pentas (20736) and Hexas (248832).
The site of advanced pioneering civilisations, the peninsula of Kirway was under Bodoh rule for 5000 years in Age 0, before achieving independence early in Age 1 and providing a major conquering contribution to the establishment of the Handorian States. Akirwa has continued to play an outstanding military role also in Age 2 and Age 3.
The Akirwa Rahl Apunyah (ARA) is the military and police force of the State of Akirwa. The ARA protects Akirwayan and Handorian interests through a standing force of more than 10,000,000 fighters, backed by over 3,000,000 in the Handorian Interforce System and about 1,000,000 in the Akirwa Kunyah Akir (Akir Prime Guard). These troops are equipped to annihilate antagonistic forces and invade threatening territories if required. The ARA works in most intimate concert with the Handorian Interforce System.
The Akirwa Pahai Sangahti is the Akirway State Cone League. At the top of the League there are two divisions (Premier and First), followed by the Second Division (with two parallel categories) and the Third Division (with three parallel categories). Then there are the Akirwayan National Leagues with 12 parallel national divisions, and under them the Akirwayan Trinity Leagues, followed by the Square Leagues.
The State of Akirwa is associated with Italy, Malta, San Marino and the Vatican.