PTU Area D2, or Area of Tnert, includes the European territories of two sovereign states (France, Monaco). It spreads from the Mediterranean Sea to the English Channel and the North Sea, and from the Rhine to the Atlantic Ocean. It also includes the island of Corsica, off the Mediterranean coast, islands in the Bay of Biscay, off the Atlantic coast (Oléron, Île de Rhé, Île de Noirmoutier), off the coast of Brittany and Normandy, in the English Channel (Chausey), and various islands separated by high tide (Mont St-Michel, Tatihou). 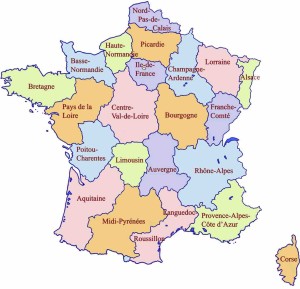 Location: Western Europe, bordering the Bay of Biscay and English Channel, between Belgium and Spain, southeast of the UK; bordering the Mediterranean Sea, between Italy and Spain.

Administrative Division: France is divided into 22 metropolitan administrative regions (21 are on continental France; one is Corsica), and four overseas regions (Guadeloupe, Guyane, Martinique, La Réunion). The overseas regions belong to South America (Continent B – Zolsah), except La Réunion, part of Africa (Continent E – Pozhad) and are not considered as part of Europe.

History: France existence as a separate entity began with the Treaty of Verdun in 843 and the division of Chalrmagne’s Carolingian Empire, though the borders of modern France are approximately the same as those of ancient Gaul. The monarchy ruled France until the French Revolution in 1789. Napoleon Bonaparte seized control of the Republic in 1799, later making himself Emperor. Following Napoleon’s defeat in 1815 in Waterloo, the French monarchy was re-established. A short-lived Second Republic lasted until 1852 when Louis-Napoléon Bonaparte proclaimed the Second Empire. His regime was then replaced by the Third Republic in 1870. France is officially known as the French Republic (République française)

Flag: three equal vertical bands of blue (hoist side), white, and red; known as the “Le drapeau tricolore” (French Tricolor), the origin of the flag dates to 1790 and the French Revolution; the design and/or colors are similar to a number of other flags, including those of Belgium, Chad, Ireland, Cote d’Ivoire, Luxembourg, and Netherlands; the official flag for all French dependent areas

Coat of Arms: This emblem has been used since 1953 and consists of a wide shield with on one end a lion-head and on the other an eagle-head, bearing a monogram “RF”. There are also a laurel branch symbolising victory of the Republic, an oak branch for strength and wisdom, the fasces associated with justice.

Location: Western Europe, bordering the Mediterranean Sea on the southern coast of France, near the border with Italy

Birth Code: 1419 (beginning of rule by the House of Grimaldi)

History: According to an ancient myth Hercules passed through the Monaco area and turned away the previous gods. The temple of Hercules Monoiko, from which Monaco derives, was built to evoke this event. Following a land grant from Emperor Henry VI in 1191, Monaco was re-founded in 1228 as a colony of Genoa. Monaco has been ruled by the House of Grimaldi since 1297.

Flag: two equal horizontal bands of red (top) and white; similar to the flag of Indonesia which is longer and the flag of Poland which is white (top) and red

The tables below provide the geopolitical content of each PTU Region of PTU Area D2, indicating their geopolitical content with references to the corresponding French metropolitan regions, sovereign state (Monaco), and their ISO-codes (first column), the area in km² (second column), the estimated population (third column), the 2009 estimated amount of Sacred Cone Basic Inceptions (SCI) in the fourth column and of Sacred Cone Gems (SCG) in the fifth column, the Provisional Order (ProvO) Secondary Jurisdiction (sixth column), and the administrative capital (seventh column). The final row includes the total for each PTU Region and the PTU Region Capital.

Details about the PTU Provinces of each PTU Region are also given, with the indication of the ternary division, the administrative departments in italics. When administrative departments include more than one PTU Province details about the arrondissements are given within brackets. Each PTU province also contains its corresponding ISO-code In some cases details of Sacred Cone Sites (SCG) are provided in indigo within square brackets with the indication of the related basic category (A – 1st Stage, B – 2nd Stage, C – 3rd Stage), nature and time of establishment, with district, county or closest town in round brackets.

Île-de-France is divided into eight departments (Essonne, Hauts-de-Seine, Paris, Seine-et-Marne, Seine-Saint-Denis, Val-de-Marne, Val-d’Oise, Yvelines). Paris is divided into 20 municipal arrondissements. Paris claims to be the geographical centre, with l’Ile de la Cité literally representing the centre of France and Km. 0. Also Vesdun, Bruère-Allichamp and Saulzais-le-Potier in the Cher department of the Centre region are considered as centres.

Centre is divided into 6 departments (Cher, Eure-et-Loir, Indre, Indre-et-Loire, Loiret, Loir-et-Cher). Vesdun, Bruère-Allichamp and Saulzais-le-Potier in the Cher department of the Centre region are considered as centres.