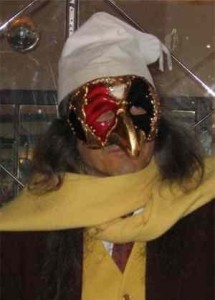 Carnival is associated with the month of February (from the Latin februa, “tools of purification”), which was a period of cleansing and purification, acted out through the provisional suspension of the social order.

During this time the reality was upside down and people could let go of their ordinary roles, taking on alternative identities and… body-swapping. It was a celebration of the mysteries of the multidimensional realms, with human beings shape-shifting into any form they liked and possibly entities from other worlds and times sliding into this earth and taking up human shapes.

Despite the separation from other dimensions and the loss of the capacity to shape-shift, which followed in more recent times, the original awareness is still currently preserved by the custom of wearing masks and costumes at Carnival.

Mardi Gras (Fat Tuesday), also called Shrove Tuesday or Pancake Day is traditionally the peak of Carnival, and also the last day for Catholics to indulge in excesses before Ash Wednesday, which starts the austere time of Lent.

Mardi Gras celebrations find their roots in ancient Pagan customs. It is believed that the period of Carnival, from Jeudi Gras to Mardi Gras, included the days added to the lunar calendar to allow it to coincide with the solar calendar. Since these were not part of the official calendar, it was possible to behave in a non-ordinary way during that time, disobeying ordinary rules and shifting social roles, letting go of their personality.

Persona comes from the Greek πρόσωπον (prósōpon), i.e. mask. The personality is a theatrical fiction, a mask. It takes time to create certain masks, especially if they are manufactured by artists, whereas other masks are cheap and can be found in supermarkets. Yet they are all masks. We can wear an attractive, seducing, luminous, ugly or depressive mask. Whatever the case at a certain stage it will get old and wear out, or we may even lose it. Hence it is useful to learn to wear other masks, or even better to learn who is behind the mask.