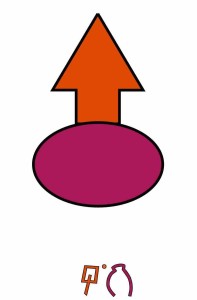 In the Astroshamanic Binary System Sun in Taurus (2) and Moon in Pisces (12) constitute Binary 2.12, or Binary number 24.

If your practical life is based on an illusion, no matter how you seem to keep your feet on the ground, they are truly in the air. You are bound to fall. You are dreaming, and the ground where you believe to stand, including yourself, will vanish as soon as you wake up. However, if you are aware of your dreams, and there is a luminous one which you truly like, then you can decide it to be part of your practical life. No matter how impossible it seems to be, you can gather the courage and determination so that your dream keep its feet on the ground.

Although these the two signs are rather different, when they are luminously harmonised, they can provide a relentless capacity to manifest honourable dreams and achieve the impossible. They spontaneously grasp the power to employ imagination in order to shape physical forms, and serve at their best when they  feel entitled to operate accordingly.

For this purpose it can be useful to relax and take a short break from your practicle life, moving consciously into the core of your dream, gaining clarity, and then come back and get down to work.

“Every now and then go away, have a little relaxation, for when you come back to your work your judgment will be surer. Go some distance away because then the work appears smaller and more of it can be taken in at a glance and a lack of harmony and proportion is more readily seen.”

Sun in Taurus and Moon in Pisces are in a sextile (60°) aspect, which involves two complementary signs, sharing the same polarity, yet not the same element. The binary can work harmoniously and offer significant opportunities as long as there is awareness and clarity of intention on both sides.

When the waning Moon is in Pisces at 60° from the Sun in Taurus, the phase of Balsamic Moon, or Waning Crescent Moon, starts. It is a crucial receptive phase, a time of healing and rest, yet also of intense preparation and completion. Here you prepare for a new cycle, the next New Moon, and let go of the residues of the old. What is mainly needed in this phase is a work of release and forgiveness. It is easy at this stage to feel restless, excited or willing to change everything and start doing something totally new and unpredictable Yet, until you learn to release the grievances recycled from the past, you will never truly create anything new. The question here is: “What do I release? What do I take in the next cycle?”

Astroshamanic Seal: an arrow pointing upward, standing upon an oval circle. This seal reminds us of our function as gatekeepers between from ordinary to ecstatic realities.

After ingesting a pale green potion, I see a Spirit with grahic features, rubbing its hands and causing the emergence of a twig with a triangle pointing downward. The triangular head of the Spirit is pointing upward. The twig transforms into a pulp, gradually taking the shape of a circle, which the Spirit wears up to its belly. The Spirit ties it with maximum pressure, so that its upper body explodes, releasing abundant water inundating the environment and creating marshes. A boat arrives with two people on board, they give me a heart-shaped stone with the seal engraved.
Another vision involves a tribal being holding a fish-shaped drum, held vertically and beaten by a drumstick. There is a desk with the map of the island of the dancing people. Who sits at the desk has the task to preserve the access to other realities. It is your task and you can gladly accept it.

Ludwig Wittgenstein (Austrian philosopher, 2.12.8)
David Brakke (May 10, 1961, Long Beach, California), American scholar and author of The Gnostics: Myth, Ritual, and Diversity in Early Christianity and Demons and the Making of the Monk: Spiritual Combat in Early Christianity.

2-12 STATE OF BRENTO,
NATION OF BARATAM
This nation is situated in the centre-south area of the State of Brento and is characterised by abundant and stunning lakes surrounded by gentle valleys. The capital is Bekruz, a major visionary centre in the Handorian States System, which is mainly out of bound for visitors.