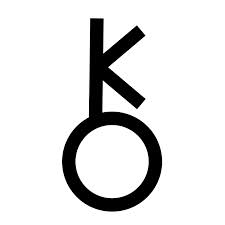 Chiron is a planetoid discovered in 1977 with an eccentric orbit crossing those of Saturn and Uranus, and a mean sidereal period of 50.68 years. This makes it appear as a bridge between the energies of these two planets.

Chiron is the most popular of all Centaurs and operates as their priest king. He differs from the majority of his quarrelsome and violent companions, showing a calm, pragmatic and wise attitude. Many generations of heroes (Jason, Asclepius, Achilles, Heracles) have Chiron as teacher.

He is the founder of the Asclepian, the ancient healing temple, and operates as teacher of the Earth connection to higher planes. He is accidentally wounded by Heracles and suffers great pain. He wants to die, but as he is immortal this is not possible. Chiron then asks Prometheus to exchange his life for his own immortality. Prometheus accepts and Chiron can finally die. As a reward Zeus places him in heaven as the constellation of Sagittarius.

Chiron expresses the energy of Mars at a higher octave, shifting action from a focus on behalf of the individual to that in the interest of a cosmic Intent and the whole.

A prominent position of Chiron in the chart (i.e. conjunct to one of the angles, the Sun or Moon) and/or during transits is typical of healers, spiritual teachers, shamans and whoever is subject to apparent suffering and deep crisis as a form of release and transformation. This is, by the way, the most common initiation for most healers. Chiron triggers into the deepest wounds and grievances so that they can be acknowledged and cleared.

Together with Pluto, it represents the most intense and devastating force in life. Chiron, by transit, often identifies the times of maximum pressure during a lifetime and, at the same time, the periods of highest illumination: those which enable the access to other dimensions.

When Chiron transits any natal planet, it brings the possibility of a radical shift of consciousness and a quantum leap as regards the energy of that planet. In any given lifetime, by age 50, Chiron has transited every planet in the natal chart and has provided potential keys to reawaken our multi-dimensional nature.

The rulership of Chiron has been attributed to Scorpio, Sagittarius and Virgo. This last rulership may offer a deeper explanation of the nature of Virgo than Mercury alone seems to provide.