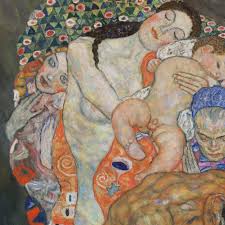 “Death is everywhere. It may be the headlights of a car on a hilltop in the distance behind. They may remain visible for a while, and disappear into the darkness as if they had been scooped away; only to appear on another hilltop, and then disappear again. Those are the lights on the head of death. Death puts them on like a hat and then shoots off on a gallop, gaining on us, getting closer and closer. Sometimes it turns off its light. But death never stops” (Carlos Castaneda, The Wheel of Time, p. 38)

Our human ordinary reality is imprisoned in a blocked sphere of time, based on constant denial of whatever exists beyond such configuration, which causes terror and fear.

There is no way out of this terror, unless one moves further.

Denial or disregard of death is inevitable for whoever identifies solely with third dimensional reality.

Denial brings fear, conscious or unconscious, and this is an inevitable fear since death of the physical body is inevitable.

Yet fear of death or pain, once it is thoroughly explored, may also be the gateway into the fourth dimension and the understanding of our authentic nature.

Death is a warning that transformation is what each one here in this physical world is meant to face sooner or later.

This warning is not new, since it has been received from the beginning of separation, with people continuing to die and suffer ever since.

It is just the separate human mind that stubbornly refuses to accept this.

Its separation from the sense of reality is such that it continues to regard death has a fatal accident, a most unpleasant event, an out of bound zone, to disregard, deny or forget about as much as possible.

And it is this denial that continues to create massive shocks and pain, whenever death or simply the fear of death inevitably arrives.

When death comes to you or somebody else, remember not to become emotional with fears, terror and concern.

Death is a riding horse of freedom.

We can master death if we connect with the fifth dimension, which is the mental realm and air.

The emotional and watery death brought by fear dissolves by connecting with the multidimensional mind.

The ego mind is based on separation and denial, and if we use that mind, when death comes, the inevitable result is terror and fear.

According to our human separated perception a physical death will come only once at a certain time in our life. It happens only at the end of life, and what counts before death comes is only life.

Life happens here and now for each one of us who are alive, while death is only in the future.

At a multidimensional level of awareness death comes all the time, which is what a separated perception refuses to acknowledge.

Death is here and now!

And if you are not aware of this, you are not living life here and now. You are indeed dead!

Healing involves bringing awareness to what is not seen and denied.

Death happens all the time, yet it keeps being hidden, repressed or denied.

The same applies to sex, which is the source of life.

Hence there is no way into any higher or unseen realm, if I am not ready to acknowledge what is happening all the time in the visible world, if I refuse to face the practical source of my fears and denials in everyday life.

In certain times in history death becomes visible for everybody, especially when there are huge catastrophes, wars or natural disasters.

Yet the greatest disasters in human history pale in comparison to natural death.

Natural death takes an average of 52 million lives every year. While you are reading this note, 144 people just died on this planet. Hence death is an ongoing development, it is just that we keep living in a world of dreams where we see it only when we wake up.

Forgiveness is letting go of our blocks to sight, out of the realisation that they do not serve us anymore.

Death confronts us with the choice between misperception and salvation, pain and happiness, dream and reality.

With death the ego dream comes to its end, although it may be recycled again with the dream of reincarnation, which is the ego dejected version of immortal life.

Dreams cannot continue forever and a general awakening is only a matter of time. Yet we can decide to wake up earlier if we wish to avoid further terror and pain.

“Tolerance for pain may be high, but it is not without limit. Eventually everyone begins to recognize, however dimly, that there must be a better way. As this recognition becomes more firmly established, it becomes a turning point. This ultimately reawakens spiritual vision, simultaneously weakening the investment in physical sight. The alternating investment in the two levels of perception is usually experienced as conflict, which can become very acute. But the outcome is as certain as God.” (ACIM, T22)