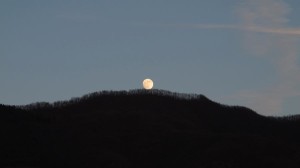 The Full Moon is usually a vibrant and particularly stimulating moment, exposing the key ingredients of the dynamics between polarities, while also embracing the pinnacle of the fundamental wholeness existing beyond all apparent conflicts.

In the lunar cycle this sense of wholeness is particularly in force with the New Moon, when both Sun and Moon are conjunct. Hence the sign where the Sun and Moon were located at the initial New Moon, which in this case was Capricorn, set the rhythm of the entire cycle, reaching its climax on a Full Moon. In that moment whatever was conceived during the New Moon, strives for direct limelight and realization. Hence, this is the moment when you can confront and manifest the practical implications of the intentions set during the New Moon, which occurred on 22 December 2014, shortly after the Winter Solstice.

The Full Moon will culminate when the Sun in Capricorn opposes the Moon in Cancer at 4:53 GMT on 5 January 2015. The major features of this process will however be effective also at least one day before and after exact Full Moon.

Another key for this Full Moon is exemplified by the qualities of Tenderness, Obedience and Integrity. Tenderness is a typical Cancer feature endorsing the way of nurturing and safety. This includes both the awareness of our own needs as well as those of others, taking actions that reveal the abundant generosity of the web of life, operating with care and kindness towards others.

Obedience is a Capricorn quality emphasizing the will to pursue our deepest truth with responsibility. True obedience also encompasses the Art of Disobedience, as Osho puts it.

Any idiot can be obedient, in fact only idiots can be obedient. The person of intelligence is bound to ask why? – “Why am I supposed to do it?” And, “Unless I know the reasons and the consequences of it, I am not going to be involved in it.” Then he is becoming responsible. Responsibility is not a game. It is one of the most authentic ways of living – dangerous too – but it does not mean disobedience for disobedience’s sake. That will be again idiotic. (Osho)

Integrity blends Capricorn and Cancer qualities, combining mother and father roles, as well as any polarity, into one harmonious whole.

A theme for this Full Moon appears to be honourable nurturing and discipline in alignment with the web of life. This involves operating with expanded responsibility in consideration of ourselves, our children, as well as their children, the future generations and the entire planetary environment.

This implies in a nutshell, and as usual, finding out who we are and what we are doing here, and take any necessary action in this respect.

Blessings and Happy Full Moon, the first in 2015!