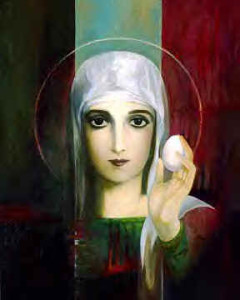 Mary Magdalene, whose feast is celebrated on 22 July, is the Cinderella of the New Testament. Despite her canonical and documented major relevance, she has always been considered with a paradoxical low profile by most Christian official authorities. Only in recent times her popularity has climaxed, due to the discovery of ancient texts and mainly to the attention given by the media.

She is described in early Christian literature as the Apostle of the Apostles (apostola apostolorum) and is prominently featured as having a very close relationship to Jesus in all canonical literature.

Mary Magdalene (from Magdala, a town near Tiberias) is the only person mentioned in all canonical gospels as being present in all three major final events of Jesus’ life: the crucifixion, the burial and and the discovery of the empty tomb. She is also the first person to see the Christ risen, endowed with the task of communicating this to the Apostles.

The first day of the week cometh Mary Magdalene early, when it was yet dark, unto the sepulchre, and seeth the stone taken away from the sepulchre.Then she runneth, and cometh to Simon Peter, and to the other disciple, whom Jesus loved, and saith unto them, They have taken away the Lord out of the sepulchre, and we know not where they have laid him. Peter therefore went forth, and that other disciple, and came to the sepulchre. So they ran both together: and the other disciple did outrun Peter, and came first to the sepulchre. And he stooping down, and looking in, saw the linen clothes lying; yet went he not in. Then cometh Simon Peter following him, and went into the sepulchre, and seeth the linen clothes lie, And the napkin, that was about his head, not lying with the linen clothes, but wrapped together in a place by itself. Then went in also that other disciple, which came first to the sepulchre, and he saw, and believed. For as yet they knew not the scripture, that he must rise again from the dead. Then the disciples went away again unto their own home. But Mary stood without at the sepulchre weeping: and as she wept, she stooped down, and looked into the sepulchre, And seeth two angels in white sitting, the one at the head, and the other at the feet, where the body of Jesus had lain. And they say unto her, Woman, why weepest thou? She saith unto them, Because they have taken away my Lord, and I know not where they have laid him. And when she had thus said, she turned herself back, and saw Jesus standing, and knew not that it was Jesus. Jesus saith unto her, Woman, why weepest thou? whom seekest thou? She, supposing him to be the gardener, saith unto him, Sir, if thou have borne him hence, tell me where thou hast laid him, and I will take him away. Jesus saith unto her, Mary. She turned herself, and saith unto him, Rabboni; which is to say, Master. Jesus saith unto her, Touch me not; for I am not yet ascended to my Father: but go to my brethren, and say unto them, I ascend unto my Father, and your Father; and to my God, and your God. Mary Magdalene came and told the disciples that she had seen the Lord, and that he had spoken these things unto her. (John, 20:1-18).

Mary Magdalene is also related to the use of oils, as in John, 12:3 (“Then took Mary a pound of ointment of spikenard, very costly, and anointed the feet of Jesus, and wiped his feet with her hair: and the house was filled with the odour of the ointment.)

The use of oils dates back to the shamanic Egyptian traditions, when they were employed to support the transition after death. Oils and spikenard In particular are also related to tantric traditions.

Mary Magdalene plays an important role in the Gnostic tradition, where it is often considered as the “companion” of Jesus.