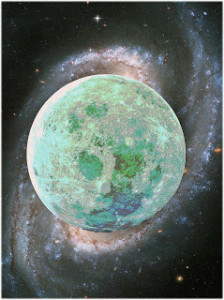 A New Moon signifies the beginning of a new cycle, an ideal time to renovate or adjust our intentions. In this respect the qualities of the sign of the New Moon provide inspirations and guidelines as regards what to seek and how to delineate new strategies or intentions.

In astroshamanism we work with 12 specific intentions, one for each New Moon. These intentions may refer to 12 areas of our life as represented by the 12 zodiac signs.

Defining an intention is not a mere intellectual process. It entails having a clear and direct imaginary experience of its accomplishment, involving all your senses.

When setting an intention it is essential not to aim at changing other people. I can work with the intentions of changing my attitude towards someone, yet not at altering his or her attitude towards me. In this context Aquarius is one of the best medicines for aining a wider perspective and learn to become lovingly detached.

Detachment is most empowering for it allows loving unconditionally, while at the same time being able to take distance during the composting time, when separation, fear, possession and all sorts of attachment prevail. The Aquarius medicine spares a lot of unnecessary pain and drama.

The New Moon is a relevant time for planting the seed of honourable intentions, which involve honestly acknowledging what you most authentically wish to manifest in your life. It is a stage of rebirth, nurtured by the qualities of the lunation sign.

Aquarius blesses with the larger perspective and the capacity to see beyond the limited horizon of ordinary reality, tapping into the multi-dimensional field, the realm of synergy.

Synergy is the simultaneous action of various energies aimed at achieving a specific intention. It is that property of systems whereby the whole is greater than the sum of its parts. Such circumstances can produce an unpredictable and miraculous power of realisation that moves far ahead the apparent make-up of the forces involved.

In an environment charged with synergy there is constant awareness that everyone is part of the same whole. It is therefore very difficult to hurt other people because they are clearly perceived as part of oneself.

Aquarius’s challenge involves laying aside the emotional drama of the everyday reality in order to allow the emergence of alternative and expanded definitions. This entails releasing the scripts that keep jeopardizing our authentic nature, breaking out of the isolation of consensus reality and embracing a new paradigm that truly serves your intentions.

Aquarius also strenuously encourages the shift from personal consciousness to global awareness. Its energy is extremely advanced in its thinking, dwelling somewhat in the future, far away from ordinary concerns, and with a genuine interest for the destiny of the planet and mankind.

On a New Moon in Aquarius there is a deep drive for change, excitement, revolution, and anything that brings about some progress in life, and also some upheaval in ordinary reality.

A question on an Aquarius New Moon is: “What can I do to make this world a better place both for the present and next generations?”

The degree of the New Moon, or Lunation point, indicates an area of life that will operate as Intent and driving force during the next cycle.

Since this New Moon takes place right at the entrance of the Sun in Aquarius, the degree of the New Moon is at 0° 08′ Aquarius. In astroshamanic work this position (lunation point) is first identified in the natal chart by noticing in which house of your chart is located and if there are planets nearby. The next step involves establishing a direct rapport with the lunation point by entering the Astroshamanic Circle, which is often represented as a circle on the floor divided into 12 sectors.

In the Sacred Circle the person in this case sits or stands in the sign of Aquarius for at least five minutes, opening up to what comes to her mind, emotions and body, taking note of whatever calls her attention, no matter how insignificant or distracting.

In the successive days, as the Moon moves on to Pisces, Aries, etc. the person can follow its path and position herself in the other signs, opening up to further insights and taking note of them.

When we work with the Moon, we are also aware of the position of the Sun and of what we experience regarding the binary relation of both Sun and Moon. We write down our remarks and keep them as a reference for the whole cycle of the Moon.

If you wish to know more about these and many other practices you are most welcome to join our workshops or connect with us for further information.