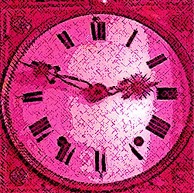 Sunday, 26 March 2017, for many countries in Europe is the shortest day of the year. This is the day when in most countries clocks go forward one hour, shifting from Standard to Summer time.

The shift from  Standard to Summer Time proves that time is arbitrary. It becomes real as a result of an agreement among human beings. This agreement makes up our reality, and there is nothing wrong about this, as long as we remain aware that there are also other realities based on other agreements.

There is ordinary human time, the result of agreements among human beings, and there is multidimensional time, which also involves other beings.

Ordinary human time is linear. It is based upon a perception consisting of two opposite poles: birth and death.

In multidimensional time these poles as well as any event in ordinary life continue to exist simultaneously, though they can be consciously selected and explored in their linearity.

As human beings we are affected both by ordinary, or third-dimensional linear time, and multidimensional time.

The problem here is that the third dimension is extremely limited compared to its higher dimensions.

For example, in the third-dimension only movements in space are feasible, whereas in the fourth dimension it is possible to navigate through time, back and forward.

These times all exist simultaneously, no matter when and where we are, just like physical locations continue to exist at the same time regardless of where you are.

If I am now in England, I cannot be in Scotland, where I was a few weeks ago, and I cannot be in Italy, where I will be next week. Yet both Scotland and Italy continue to exist although I am not there and, if I choose to do so, I could travel and move there.

In the fourth dimension the same applies to time and the related events, especially as regards their emotional implications.

If I have experienced a strong emotion of love two days ago in the company of someone, the fact that today I feel miserable because that someone is not with me does not mean that the emotion of love is not there anymore. On the contrary it continues to exist somewhere else, yet this somewhere else has nothing to do with the physical ordinary reality, as we see it. It has to do with the emotional features of reality, which as a conventional human being I am unable to see and acknowledge.

The limitations of third-dimensional reality are related to our human time management.

Here everything and everyone has an inevitable date of expiry.

People die, go away, change, and we also do the same. When we associate the fourth-dimensional emotional level to the third-dimensional physical level we inexorably experience deep separation and sufferance.

The first giant stride in healing implies making a strenuous and unbending effort to stop this. In order to truly relate with physical beings we need to be aware of the difference between fourth and third-dimension.

What counts in the third-dimension are the agreements and contracts that I make with people, and that we both agree about. These define the nature of our rapport. Dreams, emotions, assumptions, fantasies do not play any role here.

A primary healing practice here is to scan and recapitulate one’s life in search of those grievances, shifting from third to fourth dimension, which means liberating third-dimensional forms connected with grievances and working with their fourth-dimensional equivalents.