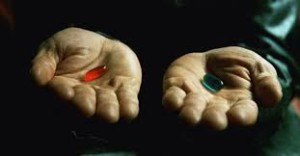 In the movie Matrix Neo is offered the choice between a red and a blue pill.

Similarly, in The Defence of Gueneveve, by the English poet William Morris (born on 24 March 1834), an angel invites the dying protagonist to choose between two cloths.

One of these cloths is heaven, and one is hell. The angel will not tell which is which, and the protagonist has to guess.

“And one of these strange choosing cloths was blue, wavy and long, and one cut short and red; No man could tell the better of the two.” After a lot of pondering the protagonist says: “God help! heaven’s color, the blue” yet unfortunately the angel reveals that blue is the colour of hell. What is shown here again is the deceit of our separated reality, where everything is upside down.

Many choices are possible in this world, yet in the end there are only two options: red or blue, reality or illusion, Light or darkness.

From an illusory perspective it is not easy to make the right choice.

Having a separated perception we often end up seeing Light in ideas and behaviours which support the exact opposite.

Paradoxically what promotes separation are not openly negative ideas or actions. These are opposed by the majority of people. What preserves the illusion, and all the related pain, are mainly ideas and behaviours commonly acknowledged as positive and luminous.

Illusion causes ignorance and deceit… And yet, if we acknowledge and trust our direct experience in life, releasing outer pressures, conditionings and cultural programming, we may find our way to the right pill…