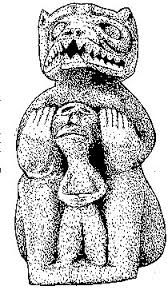 From ancient times we have inherited statues, carvings, paintings and various ornaments that, far from being artistic or creative expressions of the culture of those epochs, constitute actual learning devices for achieving connections with other dimensions. These figures portray men or women in specific positions which allow access to altered states of consciousness. The art-works revealing these postures can be found in the most ancient traditions all over the world. The anthropologist Felicitas D. Goodman has carried out extensive researches on the topic. Since 1977 she has studied more than 50 postures[i] that facilitate the receipt of significant visions and a direct experience of the oldest myths of mankind. The characteristic of these and other postures is that each one of them is in itself a portal that unseals the perception of other dimensions.

This type of contact, together with nomadism, hunting and spontaneous collection of food, seemed to be the main feature of the people who inhabited the Earth up to 40000 years ago. An idea of what life could be in those times has been documented by some contemporary anthropologists and researchers[ii] who managed to spend time with the few native people who have continued to keep their tradition unaltered. The life of those generations, technically called hunter gatherers, “is characterised by balance and harmony with the natural world – not just with animals but with all life forms, including wind and thunder, rocks and insects. Humans are not thought of as having dominion over the Earth or any of its inhabitants, and so gathering hunters are not focused on attempts to control their environment, but rather on living in harmonious relationship with the seasons, the elements, and all living beings. This attitude is so effective and adaptive that gathering and hunting existed as the only way of life on our planet for thousand of years.”.[iii]

For many and still unexplained reasons the prevalence of such attitudes decayed and new societies, devoted to the cultivation of plants and breeding of animals, prevailed. Human beings started to concentrate their energies within limited territories and avoided nomadism for they needed to stay close to their farms and control the cycles of nature. Social life began to change and during this process human beings seemed to lose that sense of deep connection with nature which was typical of their ancestors. In their spiritual practices, however, these people continued to keep the link with non-ordinary realities and with the experiences of previous cultures. Through the metamorphosis activated by trance states “it was possible to soften the boundaries between humans, animals, and plants.

The use of ritual body postures was developed within horticultural societies. These were the people who refined the use of body postures as rituals that gave shape to religious trance. Dr. Goodman discovered that they passed along to us a well-defined system that teaches us how to enter Alternate Reality, the spirit world, where we can return to a state of harmony with the four-legged, those that fly, those that swim, the plants, the trees, and the rocks”.[iv]

To employ the postures it is useful to consider a few simple suggestions. It is like operating a computer programme. According to the key which is pressed different effects are possible. This means that it is important to assume the right position and to be aware of the different results that each position can produce. The main feature of the postures is that they are authentic ritual ceremonies that express themselves through a static position. The ritual is aimed at establishing a connection with other dimensions and going beyond the ordinary state of perception.

To practice the postures it is necessary to employ the auditory stimulation of the rattle or drum. All the basic precautions and suggestions used for any shamanic journey are valid here as well. Felicitas Goodman suggests focusing on the breath and doing 50 full breaths before starting the posture. This practice of counting 50 breaths is an ideal preparation and allows the release of whatever is distracting. Then the position is assumed and the rattle or drum starts. During the time that follows, the only task is to remain in the correct position and to be open to the experience that develops. If you lose concentration or space out, bring the focus of attention to the rhythmic sound.

“Trance is not always the same. You may feel a change in your body temperature, find yourself rocking or swaying, or experience energy flowing through parts of your body. You may see patterns of color or witness complex visions that resemble watching a movie. Sometimes you may hear sounds or voices; if you find yourself interacting with an animal or other spirit, you may ask questions and receive answers. Occasionally, people even report smelling specific aromas”.[v]

The practice usually lasts 15 minutes and at the end you can use the customary procedure employed for any shamanic journey. It is useful to take note of the major features of the experience or to do a drawing. This is important even if nothing apparently seems to have happened.