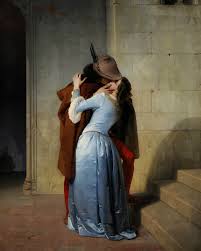 The Kiss, by Francesco Hayez

There are two types of relationships: scared and sacred.

Scared relationships are based on fear and do not allow any of the individuals involved to truly meet, because their greatest source of fear is the Third Party, or Third Gender, the very linking and meeting agent, the union of the two, beyond the separation of polarities.

The Third Party represents the connection with the Web of Life. When two human beings consciously relate with it, they prove that their relationship  is not an act of separation from such Web, that they are not being possessive towards each other, that they surrender to flow of life, that their love is unconditional.

Only the Third Party can bring awareness to our true nature, releasing the dream of separation and disclosing the veritable energy of love. This is because the Third Party is the sole gateway to our multidimensional identity. It is this awareness that our identity based on separation rejects, in order to preserve a fragmented reality, which is ultimately the cause of any sufferance and pain.

Hence scared relationships are sustained by the fear to unveil who we truly are, which means that whoever is involved in such relationships acts as a bogus fragmented perception of who we are, and not as our true self. The survival of this bogus identity is based on the denial of our multidimensional identity, since when the latter is unveiled bogus identities annihilate. Given that the extermination of this identity will occur sooner or later, and inevitably with physical death, all scared relationships are obviously based on fear.

Sacred relationships are not rapports with one partner. They are all-inclusive triad relationships, encompassing whatever and whoever exists in the realm of male and female polarity, together with the Third Party, the linking agent between the two polarities.

The focus is the other person and all life becomes a race for getting someone to play the role of the multidimensional self, a desperate search for the other half or soulmate. When most people talk about love they usually refer to this kind of relationship.

In human languages the term love has a most abundant and contradictory amount of meanings. In the ancient Greek language four different words for “love” were generally employed: eros (sexual desire), philia (love and affection between friends), storge (related to the love between parents and children) and agape (unconditional love or the love of God).

Whereas the first three types of love are based on some form of reciprocity or conditions, and pertain to the category of scared relationships, agape is impartial, unconditional and devoid of any obligation.

Agape is also the term used in the New Testament’s commandment of “love thy neighbour”. In the realm of scared relationships love is mainly meant as eros, especially in the expression “falling in love”.