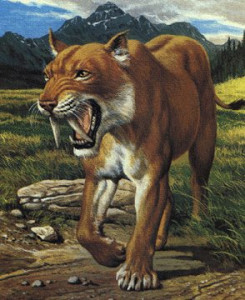 Now that the Sun is firmly in Aries, Spring is finally grounded! Its glorious spirit roams and roars like the legendary sabre-toothed tiger, the embodiment of the warrior paving its fiery way through the ocean of awareness.

This tiger was a very fierce predator that lived long time past when the earth was stuck in the Ice Age. It became extinct around 11000 years ago. All that is left of its organic form can now be seen only in the showcases of natural history museums. And yet from an energetic perspective it would be more correct to say that we, as human beings, are the ones who are energetically extinct, mummified in the showcases of a separate configuration, while the sabre-toothed tiger is indeed roving free, gliding from reality to reality.

This tiger, as it is described by Carlos Castaneda, breathes with its whole body and perceives with its entire being. It exemplifies the passion of the warrior; it is aware that each moment could be its last, and yet it never gives up its purpose, holding the courage, competence and grace to pursue its unbending intent.

As the beginning of spring and the entrance of the Sun into Aries fires up a new cycle of the year, this can be a crucial time for claiming a pure and unadulterated sense of clarity, bravely engaging with the authentic Intent that keeps roaring in the very core of our being.

For the valiant seeker on the path this Intent has nothing to do with struggling to achieve objectives and desires in the physical reality, as we humanly perceive it. Goals, purposes, manifestation, or self-assertion, as they apply in everyday life, are merely pale shadows of the Intent. This does not abide in our conditioned awareness of the world and is entirely unrelated to our identification with the body, as we see it. The Intent is a pure energy wave flowing through the empty spaces left vacant by our ordinary sensory perception. It is far beyond the world we purport to know, existing in an unseen realm, which is completely alien to our cognition, and yet paradoxically it is the matrix that produces every aspect of our life.

The unveiling of this Intent requires an enormous investment of energy, an unattainable task as long as we keep using energy to sustain our conditioned perception of reality. When all our energy goes into supporting our separate identity, and its sense of self-importance, there is no space for anything else.

Self-importance was regarded by Don Juan Matus as the supreme enemy of the shaman and the nemesis of mankind. This is evident in the unceasing concern for the way we present ourselves to the world, the focus on being liked by people, the desire to be acknowledged, which also compels us to invest massive energy in the acknowledgement of others, so that they can then acknowledge us.

Don Juan argued that if we were capable of letting go of some of that preoccupation with self-acknowledgment, “two extraordinary things would happen to us. One, we would free our energy from trying to maintain the illusory idea of our grandeur; and, two, we would provide ourselves with enough energy to enter into the second attention to catch a glimpse of the actual grandeur of the universe.” (Carlos Castaneda, The Art of Dreaming, p.37).

This grandeur of the universe becomes available when we tap into our core Intent, aligning with a field of energy we all have in the matrix of our being. This force can be identified by many names: Intent, Higher Self, God, Core Multidimensional Identity, or whatever term you feel happy about. Yet here this term has nothing to do with the torpid manner in which our separate reality interprets God and the like. It describes a vibrant, living and most liberating force, entirely unrelated to the mummified deities of consensus worship. Developing awareness of this force as the primary energy in the universe is the only chance for any true human evolution.

A flaming blessing on your Spring!