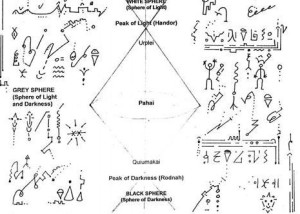 According to the Epic of the Sacred Cone, and the traditional cosmology of the Provisional Order, the Middle World, and its equivalent in the current space-time configuration of planet Earth, includes the circular base of two spiral cones placed one on top of the other. The upper cone is associated with the Higher World, whereas the lower cone corresponds to the Lower World.

The epic function of the Grey Sphere consists in facilitating the connection between Spheres and in gradually undoing itself so as to allow the ultimate merging of the White and Black Sphere. The Grey Sphere embodies specific areas aimed at supporting the above function. In this context the Epic identifies three main strategic locations: Handor or Handorian States System for the White Sphere, Rodnah or Nairodnah States System for the Black Sphere, and Pahai or Provordo Etnai for the Grey Sphere.

The first two areas represent the Peak or access gate to the Sphere to which they refer and the apex of the two cones of the Grey Sphere. The third area (Pahai) is the system of connection between such cones and paves the way for the vertical axis. The Sacred Cone constitutes the operative substantiation of Pahai in the form of a strategic and provisional device incepted in the Grey Sphere with the aim of establishing progressive links between White Sphere and Black Sphere. The Sacred Cone is the primal operative device in astroshamanic healing.

Pahai, and/or the Sacred Cone, is the primary object of categorization of the Provisional Territorial Units Duodecimal System.