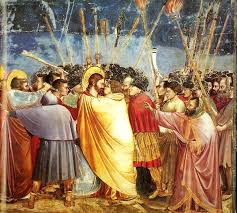 This Wednesday, is Holy Wednesday in the Christian tradition, which is also called Spy Wednesday, with reference to the betrayal of Judas Iscariot.

Among the apostles Judas obviously stands out as the most unusual. Besides being the only apostle devoid of any sainthood he is also one of the most despised and condemned men in history.

All official Gospels and Christian accounts show Judas as the traitor who gave up Jesus to those who crucified him. For “30 pieces of silver” he betrayed Jesus by identifying him with a kiss in the presence of Roman soldiers and then later returned the bribe and committed suicide.

The recently discovered and authenticated Gospel of Judas provides an alternative view. This text portrays Judas as a strategic traitor acting at Jesus’ request. According to this text Judas is described as Jesus’ closest disciple and the only one capable of truly understanding Christ’s work.

In the most controversial passage Jesus tells Judas, “you will exceed all of them. For you will sacrifice the man that clothes me.” For conventional eyes this is treason, yet between Jesus and Judas it is a sacred agreement. A similar view is given in Nikos Kazantzakis’ novel The Last Temptation of Christ, and its Martin Scorsese’s movie adaptation, in which Judas, as Jesus’ closest friend, fulfils the Christ’s destiny to die on the cross and becomes the catalyst for the event which according to Christianity brought about salvation for all mankind.

In the canonical Gospels Jesus declares “For I, the Son of Man, must die, as the Scriptures declared long ago. But how terrible it will be for my betrayer. Far better for him if he had never been born!” (Mark 14:20).

Given the accusation of “betraying” Jesus, Judas has surely had a terrible fate in this world. Yet the Greek word paradidomi, employed various times in the Gospel, whose meaning is primarily “surrender, release” or “hand over, deliver so as to take care of” and secondarily “betray” is translated as “betray” only in relation with Judas and as “surrender, hand over” in all other circumstances.

The point for me here is not to feed any futile controversy regarding the rehabilitation of Judas. After all even the traditional Christian Church warns not to demonize Judas’ malice. “He was chosen by Christ to be one of the Twelve. This choice, it may be safely said, implies some good qualities and the gift of no mean graces.” (The Catholic Encyclopedia).

The aim here is to survey the underlying nature of Pisces and the time of transition from Pisces to Aries. According to the astrological association of the 12 apostles with the 12 zodiac signs, Judas stands for the twelfth and ultimate sign, Pisces and the twelfth house, which are related with the deepest mysteries and secrets of human life.

Since Pisces is the final part of the journey and Aries the start of the journey, something most mysterious and incomprehensible is bound to happen at this point (see the article Mind the Gap). In Pisces there is a gateway of disintegration, a “Dust thou art, and unto dust thou shall return” zone, which can potentially and ultimately release us from the perception of separation.

Here the ego may definitely disintegrate, annihilating any trace of fear and pain, and unveiling the immaculate reality of love. Yet, if we fall for the terror that this disintegration apparently involves, the radical opposite may happen, as we are swallowed once again by the ego’s predicament and recycled in the separated world.

The kiss of Judas stands at a threshold of inevitable dissolution, staging either the peak of misery or the triumph of love. The ego is bound for pain, fear and self-destruction, which is what it keeps reprocessing over and over again. At the final gate we confront the zenith of this fear. Here either we succumb alone in deep fright, providing manure for the separated world, or take firm refuge in the loving God, waking up to the true world.

Whatever the case, the separated world will never be able to grasp the mystery of this crucial zone. Here we surrender to the genuine totality of our being, and no matter whether the world curse or sanctify us, whether we are celebrated as saviour or damned as traitor, we will take refuge in the Beloved and finally unveil our true heart’s desire.

God is a mystery, and life, as well as each one of us, is also a mystery. All we need to do is to allow the mystery to reveal itself and letting it be. Here we allow God to be God, and accept to be in his presence, and in the presence of whoever surrounds us, including ourselves. This attitude develops through regular practice, through provisionally and repeatedly detaching from the drama of consensus reality.

The final call is to become entirely awake to the mystery, to unveil ourselves by losing ourselves in the wholeness of existence, as we discover also our crucial part in this wholeness, and receive the Kiss of God.
© Franco Santoro, Findhorn Foundation Cluny Hill, Forres IV36 2RD, UK, info@astroshamanism.org