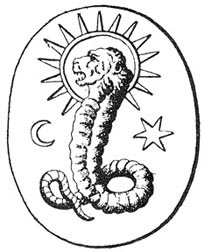 The term ego comes from the Latin word meaning I and refers to the awareness of one’s separate identity. In most modern English dictionaries the ego is defined as “the self, especially as distinct from the world and other selves”. Despite its general negative connotations, due to its association with terms such as egoism and egocentric it is still meant as the I and whoever or whatever is generally understood as being our own individual identity.

The ego is basically our sense of individuality, the belief of being an autonomous unit and of existing in a separated reality.

Since the separation took over all healing and mystery traditions have provided tools aimed at releasing the identification with the ego and acknowledging our true nature as undivided Self.

The Sicilian and Greek shaman-philosopher Empedocles, who first identified the four elements, considered a divine self alien to the physical separated identification with the body and longing to return to its original unity with God. The Gnostics called this split lower self the eidolon, which means “image” and is what human beings appear to be.

The eidolon is the false self, the astral bogus double, which is ceremonially released with the crucifixion. The Roman philosopher Plotinus calls it the “intruder”, while the Syrian Gnostic Basilides defines it as the “parasitic psyche”. The eidolon, from which the word “idea” comes from, is the identification with the ego and the related idea of being the physical body, rather than the Consciousness which has produced the idea itself.

All healing mystery paths of initiation involve realizing that we are not the ego and retrieving the complete awareness of our authentic nature. This is astroshamanically described as the shift of identification from the periphery of the Sacred Circle, the Human Arbitrary Configuration (HAC), to the centre, the Core Multidimensional Identity (CMI).

According to Gnosticism, the Demiurge, the fashioner of the divorced lower world of manifestation and chief of its rulers (archons), epitomizes the ego and the realm of separation. He is the originator of evil and cosmic imperfection. Hence the real God is not the creator of the cosmos, it is the Demiurge.

The early Christians associated the Demiurge with the Old Testament’s Jehovah and his capricious, vengeful and jealous nature. This defective god created a world based on his own flawed image and removed from the essential wholeness of which he was an expression. Like the ego, he is mislaid by his personal whims of being the absolute power and knowing everything about life. Yet, although the Demiurge appears inadequate and foolish, he is not wicked. Evil is the result of his forlorn attempt to deal with the cluttered reality he has generated.

The function of the initiation process, far from promoting antagonism with the Demiurge, is to release the perception of separation and unveil the reality of unity, or bring together the Lower with the Higher Self. As the Gnostic master Valentinus writes: “When the human self and the divine ‘I’ are interconnected they can achieve perfection and eternity.”

“On the Christian way the psychic initiation is about progressively perfecting the eidolon – the self-image – by understanding the self as an integral part of the whole. The pneumatic initiation is about transcending the illusion of personal autonomy altogether and being Consciousness passively witnessing the unfolding Oneness, which includes all of ‘our’ thoughts and actions. When we do this, it is not that we discover we are just programmed automata with no free will. It is that there is no ‘us’ to be free or otherwise. There is the Mystery witnessing the Oneness.”[i]

Healing initiatory processes are not concerned with intellectual speculations. They are very pragmatic and deal with experiential factors which are generally overlooked in the clouds of complexities. We are the only one who can choose whether to employ the world in order to remain in a state of fear, where we are the victims of circumstances, or to consider it as a learning path to retrieve our memory and reach out for our true inheritance. To support the latter choice, there are different tools which in the end identify only one remedy: release, or forgiveness.

Forgiveness is practiced “not because we are being <good> and <charitable>, but because what we are seeing is not true. We have distorted the world by our twisted defenses, and are therefore seeing what is not there. As we learn to recognize our perceptual errors, we also learn to look past them or <forgive>. At the same time we are forgiving ourselves, looking past our distorted self-concepts to the Self That God created in us and as us” (ACIM, xi).

Through forgiveness, we let go of the past and, with it, all prejudices, fears and grievances that the ego has placed between us and our Core Multidimensional Identity, which A Course in Miracles calls God. God is here meant as the love within, our true source where we acknowledge ourselves as part of the Whole.

The ego is a false centre, a separate identity, based on fear and on an illusive perception of what we are. It is the belief in the reality of a separated and bogus self, made as substitute for our true multidimensional nature, “a symbol of impossibility; a choice for options that do not exist”, “nothingness, but in a form that seems like something” or “an evil dream that but seemed real while you were dreaming it” (ACIM, CT81).

The ego deprives us of our natural ecstatic state of love, peace and bliss, creating an ongoing setting based on conflicts, grievances, fear and guilt. Yet since the ego is a hallucinatory state there is no point in fighting it. Being at war with the ego will only boost its illusory reality.

As A Course in Miracles puts it: “I do not attack your ego. I do work with your higher mind, the home of the Holy Spirit, whether you are asleep or awake, just as your ego does with your lower mind, which is its home. I am your vigilance in this, because you are too confused to recognise your own hope. I am not mistaken. Your mind will elect to join with mine, and together we are invincible. You and your brother will yet come together in my name, and your sanity will be restored.”

And yet an initiatory path truly aimed at liberation from our separate self needs first of all to be pragmatic. Many have tried to take the quantum leap from separation into unity, though it seems as most of them have failed, often quite miserably. It is legitimate to acquire courage and athletic capacities to take this leap, while it is also legitimate to build bridges. The advantage of bridges is that they can allow access to all souls, regardless of their athletic performance.

The ego is a bogus identity as long as its function is to separate us from who we truly are. An yet the ego can also work with the intentional aim of reuniting with our true self.

This is the ecological ego, a provisional, organic, biodynamic identity, fully recyclable in the unity of the Whole, a disposable self, intentionally aimed at transiting from separation to the multidimensional reality of our true self.

Let go of your old conventional ego, use only ecological ego.

Image: A lion-faced deity found on a Gnostic gem probably depicting the Demiurge.

Notes: [i] Quoted in Timothy Freke & Peter Gandy, The Jesus Mysteries: Was the Original Jesus a Pagan God?, Thorsons, p. 136.