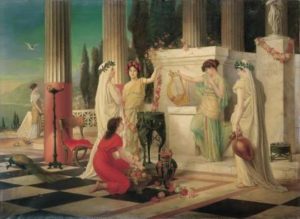 The asteroid Vesta was discovered in 1807 and represents the brightest asteroids of the belt. It is named after the virgin Roman goddess of the sacred flame and home altars. Hestia, the Greek name for Vesta, means “hearth”, which is the fire that burns in the heart of the household, the centre of the multi-dimensional family, the Great Tree.

Vesta was very popular in Rome where all meals began and ended with an offering to her. She also received the best part of all sacrifices celebrated in the temples of all Roman gods. Vesta and her priestesses (Vestals) committed to chastity and a laborious life which was compensated with great privileges and honours.

Chastity here was not absolute: i.e. it would involve abstaining from conventional sexual relationships based on procreation, sensual or romantic love, but could imply the use of sexual energy for the healing of others and for multidimensional purposes.

The Vesta archetype relates to sexuality as an initiatory rite, an empowering gift and exchange of medicine, which does not ask any relationship commitment in return. Vesta moves beyond the ordinary ethic of sexuality, confronting us with its crude esoteric reality. These patterns apply to all women and men, yet with various degrees of awareness and intensity.

The Vesta archetype is not against relationships or sex. She simply does not want partners or lovers hanging around and ruining her sacred space.

Astrologically when the connection with this asteroid is strong, time and space to be alone or involved with one’s deep creative or working activities is vital.

The position of Vesta in the natal chart can indicate the areas where the individual is likely to commit to something greater than the ordinary aspects of life and joyously sacrifice herself for the benefit of the whole. Vesta, in general, involves an energy of gentle withdrawal, moving within both spiritually and pragmatically. It is the force that assists us whenever we lose the connection with our true self as a result of investing excessive energies in relating with others.

Vesta is related with sisterhood and brotherhood, both as sibling and mainly as someone with whom the relationship is deep and intimate, yet devoid of romanticism or conventional partnership. In particular, Vesta gives essential clues on how sexual energy can be employed in a sacred, shamanic and healing way.

This is particularly useful for those who have major difficulties in dealing with sex issues. Here Vesta resonates both with Virgo and Scorpio. Many individuals that experience apparent limitations, frustration or deviations in their sexuality, as it is perceived according to consensus reality, have often made a precise choice at the level of their soul, which is essential they understand, in order for them to express their potential and enjoy their true purpose in life.

The relationship with Vesta can help and support the acknowledgement of their true sexual nature and empower shamanic and healing potentials, releasing guilt and conditioning generated by conventional ideas and prejudices.

The transits of Vesta often indicate a time of retreat and solitude, or the beginning of a specific work which is likely to become a sacred service or mission in one’s life. These transits also may relate to a reawakening of our most intimate and sacred way of approaching sexuality and may support significant developments in this respect.

Please be aware that this article refers to Vesta, as an astrological archetype, and not to the Vestals or Vestal Virgin, who were the historical priestesses of the goddess Vesta in ancient Rome.