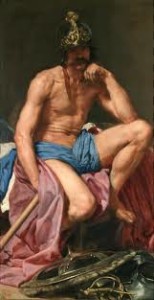 In the Roman calendar March was named for Mars, the god of war, because it marked the beginning of the season for warfare. During this month the god was celebrated in preparation for imminent conflicts. Yet Mars was not evoked to promote wars and conflicts. It was addressed to preserve peace. Throughout human history the prevalent idea has been that attack is required in order to defend oneself and promote peace. When we think that attack is necessary in order to defend ourselves, we believe that harming someone can bring peace. We defend ourselves from the fear towards someone, by attacking them. In this way fear is addressed with conflict and, far from being eliminated, it amplifies and is therefore kept. Hence there will always be seasons devoted to warfare.

“You make what you defend against, and by your own defense against it is it real and inescapable. Lay down your arms, and only then do you perceive it false. It seems to be the enemy without that you attack. Yet your defense sets up an enemy within; an alien thought at war with you, depriving you of peace, splitting your mind into two camps which seem wholly irreconcilable. For love now has an “enemy,” an opposite; and fear, the alien, now needs your defense against the threat of what you really are.” (Lesson 170, A Course in Miracles)

Ryūnosuke Akutagawa (March 1, 1892 – July 24, 1927) Japanese writer, regarded as the “Father of the Japanese short story”. Author of Rashōmon and Dragon: the Old Potter’s Tale, which is about a joke played by a monk who erects a sign next to a pond reading “On the third day of the third month, the dragon of this pond will ascend to heaven”. His sign ends up attracting many people, including influential lords. A large crowd watches the lake faithfully, then the sky darkens and everyone gathered, including the monk, believe they see a dark powerful dragon ascending towards the sky. Afterwards, no one will believe the monk’s claim that the sign was a practical joke; even the monk, the instigator, believes a dragon from the pond actually flew towards his home. “A man sometimes devotes his life to a desire which he is not sure will ever be fulfilled. Those who laugh at this folly are, after all, no more than mere spectators of life.”

David Niven (12.8) Sun in Pisces, Moon in Scorpio, born March 1, 1910 in London, British actor and novelist, best known for his roles as Phileas Fogg in Around the World in 80 Days and Sir Charles Lytton, a.k.a. “the Phantom”, in The Pink Panther.

Tróndur Patursson (12.3) Sun in Pisces, Moon in Gemini, born in Kirkjubøur on March 1, 1944 ,  Faroese painter, sculptor, and glass artist. He was educated in Norway and was initially a sculptor.

Gospel of Thomas: (52) His disciples said to him, “Twenty-four prophets spoke in Israel, and all of them spoke in you.” He said to them, “You have omitted the one living in your presence and have spoken (only) of the dead.”