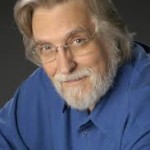 The deepest secret is that life is not a process of discovery, but a process of creation. You are not discovering yourself, but creating yourself anew. Seek therefore, not to find out Who You Are, but seek to determine Who You Want to Be.