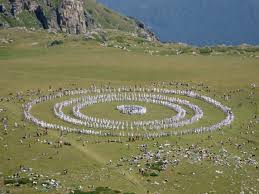 What sort of love is permeated by jealousy? You are jealous because you are unaware that everything you need is inside you.

What does jealousy indicate? Jealousy is love manifested in the physical world. If you are jealous you have a debt to pay; if someone is jealous of you, he has a debt to pay to you.

Human happiness is defined by the hardships and conflicts you have been through. The greater they are, the greater is your happiness.

“Those Who From Heaven To Earth Came”. They landed on Earth, colonized it, mining the Earth for gold and other minerals, establishing a spaceport in what today is the Iraq-Iran area, and lived in a kind of idealistic society as a small colony.

They returned when Earth was more populated and genetically interfered in our indigenous DNA to create a slave-race to work their mines, farms, and other enterprises in Sumeria, which was the so-called Cradle of Civilization in out-dated pre-1980s school history texts. They created Man, Homo Sapiens, through genetic manipulation with themselves and ape man Homo Erectus.