Just as you do not like misery, in the same way others also do not like it. Knowing this, you should do unto them what you want them to do unto you.

Mahavira, वर्धमान महावीर, born 12 April 540 BCE, 24th and last tirthankara of Jainism, “Can you hold a red-hot iron rod in your hand merely because some one wants you to do so? Then, will it be right on your part to ask others to do the same thing just to satisfy your desires? If you cannot tolerate infliction of pain on your body or mind by others’ words and actions, what right have you to do the same to others through your words and deeds?”

Nothing is as real as a dream. Responsibilities need not erase it. Duties need not obscure it. Because the dream is within you, no one can take it away. 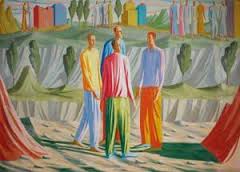 Raven Grimassi (April 12, 1951 – March 10, 2019), American author of over 20 books, scholar of paganism with over 40 years of research and study in the genre of Wicca, Stregheria, witchcraft and neo-paganism. He popularized Stregheria, the religious practice of witchcraft with roots in Italy.

Gospel of Thomas: (94) Jesus said, “He who seeks will find, and he who knocks will be let in.”