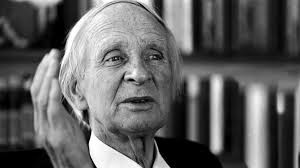 “If we could but make friends with our inner selves, come to terms with our own darkness, then there would be no trouble from without. But before we can close out split natures we must forgive ourselves. We must, we must forgive our European selves for what we have done to the African within us.”

“I have always had a hunch that [coincidences] are a manifestation of a law of life of which we are inadequately aware and which in terms of our short life are unfortunately incapable of total definition, and yet however partial the meaning we can extract from them, we ignore it, I believe, at our peril. For as well as promoting some cosmic law, coincidences, I suspect, are some sort of indication.”

Laurens van der Post: born on 13 December 1906 in South Africa, with Sun in Sagittarius, Moon in Scorpio and Ascendant in Libra. Sir Laurens Jan van der Post appears as an outstanding model of Sagittarius energy. Prolific writer, journalist, conservationist, traveller, educator, storyteller, explorer, television personality and strong opponent of apartheid, Van der Post’s works are a fascinating Jupiterian blend of adventure, philosophy, politics and search for truth. He has also been described as “a shaman, a trader in myths, a man who bent both legend and reality to his own ends. Where his end was to give meaning and inspiration to a world increasingly searching for it, he succeeded spectacularly, and that is why he charmed his way through life.” In the novel The Face Beside the Fire he wrote: “For this dream of being awake suddenly was more urgent that the condition of actually being awake. He felt like an explorer who had at last walked into the true unknown and found that the treasure of discovery was the realisation that true awareness needs not only the fact, but also the dream of the fact: these are the two vital ends to the journey between.”