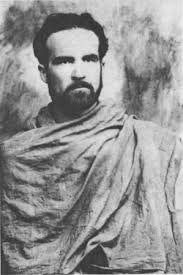 As long as you have not grasped that you have to die to grow, you are a troubled guest on the dark earth

Mircea Eliade: born on 13 March 1907 in Romania, with Sun and Moon in Pisces, Aquarius Ascendant, died 22 April 1986, he is one of the world major scholars in the field of religion, symbolism, myths and shamanism. The main theme in his early writings and novels was erotic love. His further academic works are outstanding classic. In The Myth of the Eternal Return he deals with the ordinary and non-ordinary experience of history and time. Eliade wrote bulky works, such as the 16-volume Encyclopedia of Religion (as editor-in-chief), and A History of Religious Ideas. Eliade considers religious experiences as hierophanies (i.e. manifestations of the sacred in the ordinary) and in his works attempts to describe the forms they have taken in the world through different space-time settings. According to Eliade, in the current consensus reality people have lost their contact with the natural cycles of time and are conditioned by a linear sense of history. In his prestigious work Shamanism: Archaic Techniques of Ecstasy Eliade describes shamanism as “one of the archaic techniques of ecstasy – at once mysticism, magic, and ‘religion’ in the broadest sense of the term”. Eliade writes how most shamans receive their power from ancestors and also refers to the original shamanic ancestors who interacted directly with celestial forces. Eliade provides several examples of such original shamans. The Buryat tell of an eagle who was sent to be a shaman, yet the people would not accept a mere bird. Hence God sent the eagle back with the power to create a shaman. The eagle saw a woman sleeping under a tree, with whom the eagle had intercourse. Her son became the first shaman.

Eliade describes a large variety of shamanic initiation. For example, the initiation of Araucanian Shamaness works as follows. She is massaged with various herbs by older shamanesses, who then suck her breasts, belly and head until blood spurts out. The initiate then gets dressed and sits in a chair. Songs and dances continue all day. The next day the older shamanesses and the initiate climb a ladder made out of trees. Then the ceremony is completed by sacrificing a sheep.

“There are three ways of becoming a shaman: first, by spontaneous vocation (the “call” or “election”); second, by hereditary transmission of the shamanic profession; and, third, by personal “quest,” or, more rarely, by the will of the clan. By whatever method he may have been designated, a shaman is recognized as such only after having received two kinds of instruction. The first is ecstatic (e.g., dreams, visions, trances); the second is traditional (e.g., shamanic techniques, names and functions of the spirits, mythology and genealogy of the clan, secret language). This twofold teaching, imparted by the spirits and the old master shamans, constitutes initiation. Sometimes initiation is public and includes a rich and varied ritual; this is the case, for example, among some Siberian peoples. But the lack of a ritual of this sort in no way implies the lack of an initiation; it is perfectly possible for the initiation to be performed in the candidate’s dreams or ecstatic experiences… In Siberia, the youth who is called to be a shaman attracts attention by his strange behavior; for example, he seeks solitude, becomes absentminded, loves to roam in the woods or unfrequented places, has visions, and sings in his sleep. In some instances, this period of incubation is marked by quite serious symptoms; among the Yakut, the young man sometimes has fits of fury and easily loses consciousness, hides in the forest, feeds on the bark of trees, throws himself into water and fire, cuts himself with knives. The future shamans among the Tungus, as they approach maturity, go through a hysterical or hysteroid crisis, but sometimes their vocation manifests itself at an earlier age: the boy runs away into the mountains and remains there for a week or more, feeding on animals, which he tears to pieces with his teeth. He returns to the village, filthy, bloodstained, his clothes torn and his hair disordered, and it is only after ten or more days have passed that he begins to babble incoherent words. Even in the case of hereditary shamanism, the future shaman’s election is preceded by a change in behavior. The souls of the shaman ancestors of a family choose a young man among their descendants; he becomes absentminded and moody, delights in solitude, has prophetic visions, and sometimes undergoes attacks that make him unconscious. During these times, the Buriat believe, the young man’s soul is carried away by spirits; received in the palace of the gods, it is instructed by his shaman ancestors in the secrets of the profession, the forms and names of the gods, the worship and names of the spirits. It is only after this first initiation that the youth’s soul returns and resumes control of his body. A man may also become a shaman following an accident or a highly unusual event- for example, among the Buriat, the Soyot, the Eskimos, after being struck by lightning, or falling from a high tree, or successfully undergoing an ordeal that can be homologized with an initiatory ordeal…” Quote from Rites and Symbols of Initiation: The Mysteries of Birth and Rebirth.

“It was lunar symbolism that enabled man to relate and connect such heterogeneous things as: birth, becoming, death, and ressurection; the waters, plants, woman, fecundity, and immortality; the cosmic darkness, prenatal existence, and life after death, followed by the rebirth of the lunar type (“light coming out of darkness”); weaving, the symbol of the “thread of life,” fate, temporality, and death; and yet others. In general most of the ideas of cycle, dualism, polarity, opposition, conflict, but also of reconciliation of contraries, of coincidentia oppositorum, were either discovered or clarified by virtue of lunar symbolism. We may even speak of a metaphysics of the moon, in the sense of a consistent system of “truths” relating to the mode of being peculiar to living creatures, to everything in the cosmos that shares in life, that is, in becoming, growth and waning, death and ressurrection.”

L. Ron Hubbard, born on 13 March 1911, Sun Pisces, Moon Virgo, Ascendant Sagittarius, American science fiction author and founder of Scientology, died January 24, 1986. “You don’t get rich writing science fiction. If you want to get rich, you start a religion.” “There is no war not based on lies, there is no infamy alive without its kindred kin, deceit.”

ACIM: 72. Holding grievances is an attack on God’s plan for salvation.