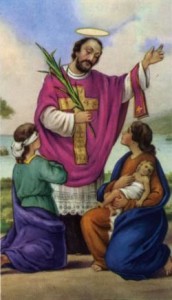 St. Valentine’s Day: According to a legend Valentine was a priest operating in ancient Rome. When Emperor Claudius II realized that single men were better soldiers than those with wives, he banned marriage for young soldiers and men. Valentine disregarded this decree and continued to perform marriages for young lovers in secret. Then, he was discovered and condemned to be beaten to death with clubs and to have his head cut off.  This happened on 14 February, which is St. Valentine’s Day.

In ancient Rome the same date was a holiday devoted to Juno. the goddess of women and marriage. The following day, 15 February marked the beginning of the Feast of Lupercalia, which was the purification festival of Lupercus, the god of fertility, a god represented as half-naked and dressed in goat skin. As part of the ritual, the high priests would sacrifice goats to the god, and after drinking wine they would run through the streets of Rome holding pieces of the goat skin above their heads, touching anyone they met and blessing them with the gift of fertility. The Lupercalia were shamanically connected with the power animal of the Wolf.  The term comes from luperci, “young wolves”, which was also the name of an ancient Roman shamanic confraternity. As a matter of fact the Lupercalia was the festival aimed at honouring the Wolf’s rescue of the legendary founders of Rome, the twins Romulus and Remus, who also appeared to be part of this shamanic group. The term lupa, “wolf”, was the nickname given to a prostitute, who in this case was a ierodula, that is, a sacred prostitute connected with the shamanic mysteries of the Wolf. 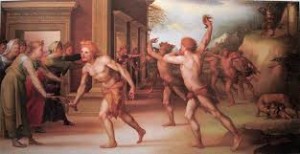 On 14 February, the eve of Lupercalia, the names of Roman girls were written on slips of paper and placed into boxes.  Each young man would draw a girl’s name from the box and would then be partners for the duration of the festival with the girl whom he chose. At times this partnership lasted an entire year, and sometimes they would also marry. The Catholic Church transformed this pagan feature by substituting the names of saints for those of maidens. Hence, instead of choosing maidens, young men would elect a patron saint for the coming year, just like we at Findhorn on the Winter Solstice choose our individual and community angel for the year.

According to another legend while Valentine was in prison he fell in love with the jailor’s daughter. Before his death it is believed that he wrote a letter, which he signed “from your Valentine”.

Barbara Hand Clow: born 14 February 1943, with Sun in Aquarius, Moon in Gemini and Ascendant in Leo, international lecturer and workshop teacher and writer, (11.3.5). In Liquid Light of Sex, one of the most inspiring books on astrology, she explores how kundalini energy can be directed with intention in order to move through major periods of crisis. She describes various stages of human life in relation with astrological transits, focusing in particular to three turning points: age 30 (the time of great structural changes), age 40 (the mid-life crisis calling for major spiritual changes) and age 50 (a time of surrender to the greater spiritual forces). Clow’s Chiron: Rainbow Bridge, is one of the significant early studies on Chiron. Clow regards Chiron as the ruler of Virgo and the 6th house. For her Chiron is the teacher of the Earth connection to higher planes and its sighting indicates the time has come for us to manifest our divinity. “Chiron is the wounded healer; he triggers us into feeling our deepest inner wound so that we can clear inner pain.” Virgo in the natal chart shows how we employ Saturn’s structural powers to manifest Uranus’s creative energy in our lives. In her bestselling book, The Pleiadian Agenda and also in other works, Clow provides a detailed description of multidimensional realms, as explained by the Pleiadians through her.

Unless people know how to manipulate others, they are unable to realize that someone is manipulating them.

Like trying to push a huge fallen tree erect, there is no turning back now. Now that we have attained fruition through these nine phases of evolution, we will learn to respect the incredible intelligence of each cell; protect all species; value the genius of family bonding; admire the awesome power of mind; feel the power in our hearts; identify hierarchical power; bless nature’s plenty; use technology as a tool, not a toy; and enjoy the bliss of Oneness. We will invent the new world by co-creating reality in universal awareness.

A really big event, such as Christ’s birth, occurs and people feel its real meaning. The event is then severely distorted and made into a cultural obsession. The control forces constantly repeat part of the story to satisfy the longing of people for freedom from evil. Lies are incessantly repeated about Christ, but people are so hungry for the real story, they swallow the lies like hungry parrots. The false story is repeated ad nauseum until even the liars can’t remember the truth. The obsession for truth is constantly placated, and you run around in circles like mindless rats seeking something.

Gospel of Thomas: (37) His disciples said, “When will you become revealed to us and when shall we see you?” Jesus said, “When you disrobe without being ashamed and take up your garments and place them under your feet like little children and tread on them, then will you see the son of the living one, and you will not be afraid”

Concise Epitome: 5.3 Then a remote Peak came to us to bestow light in exchange of darkness. (Fu allora che un Picco remoto a noi per elargire luce in cambio di buio giunse).