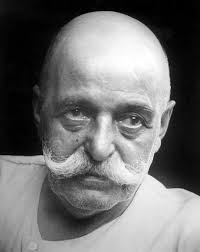 Man has no individual I. But there are, instead, hundreds and thousands of separate small “I”s, very often entirely unknown to one another, never coming into contact, or, on the contrary, hostile to each other, mutually exclusive and incompatible. Each minute, each moment, man is saying or thinking, “I”. And each time his I is different. Just now it was a thought, now it is a desire, now a sensation, now another thought, and so on, endlessly. Man is a plurality. Man’s name is legion.

George Ivanovitch Gurdjieff: born on January 14, 1866? (10.6.7) with Sun in Capricorn conjunct Saturn, Moon in Virgo, and Ascendant in Libra, died on 29 October 1949, was a master of the gap between ordinary and non-ordinary realities.

Gurdjieff described ordinary reality as a form of sleep where men live. He believed that the development of the capacity to wake up from this sleep required a consistent work on oneself, guided initially by a teacher. The work implied being aware of the ordinary unconscious details of life, such as eating, walking, speaking, standing, etc, and also practicing specific movements. Gurdjieff employed the “Stop” practice: ordering his students to freeze suddenly and without notice no matter what they were doing and keeping the position they found themselves in when this signal was made. Gurdjieff is known mainly through the works of his pupil, P.D. Ouspensky and other authors. Three books by Gurdjieff, forming the trilogy All and Everything were published after his death. Out of his 10.6 dexterity, he was able to fix anything. People would give him something broken and he would find a away to mend it. He promoted the harmonious connection of the ‘wisdom’ of the East and the ‘energy’ of the West in order to save the planet from destruction. Gurdjieff describes his cosmology as a hierarchy of scales, starting from the all-encompassig Absulute, or God, followed by the universes, galaxies, all the suns of our galaxy, our Sun, and so on, with the Earth being at the bottom of the scale before the Moon. Each scale receives energy from the scale above and passes it to the lower. In this process organic life on Earth, including mankind are merely “food for the Moon” (see: In Search of the Miraculous). The Moon is regarded here as a planet in the process of being born, operating as a huge magnet sucking into itself the vibrations generated by intense human experiences, such as death, fear, pain, anger. This view that mankind is merely food for someone else is common also to the Gnostic and shamanic traditions. According to Gurdijeff the amount of energy needed to feed the Moon is exactly the same released by disciplined people through their inner work and practices “by means of conscious labours and intentional sufferings”. If this is not the case, the required energy will be extracted in huge amounts causing major and unavoidable suffering. Conscious labour and intentional suffering are astroshamanic synonyms or Intent and Function. Meetings with Remarkable Men is a 1979 British film directed by Peter Brook about the early life of Gurdjieff and his companions.

Quotes:
The present period of culture is, in the whole process of perfecting humanity, an empty and abortive interval.
One of man’s important mistakes, one which must be remembered, is his illusion in regard to his I.
I ask you to believe nothing that you cannot verify for yourself.
By teaching others you will learn yourself.
Conscious faith is freedom. Emotional faith is slavery. Mechanical faith is foolishness.
Love without knowledge is demonic.
A considerable percentage of the people we meet on the street are people who are empty inside, that is, they are actually already dead. It is fortunate for us that we do not see and do not know it. If we knew what a number of people are actually dead and what a number of these dead people govern our lives, we should go mad with horror.
A man may be born, but in order to be born he must first die, and in order to die he must first awake.
In properly organized groups no faith is required; what is required is simply a little trust and even that only for a little while, for the sooner a man begins to verify all he hears the better it is for him.
Every ceremony or rite has a value if it is performed without alteration. A ceremony is a book in which a great deal is written. Anyone who understands can read it. One rite often contains more than a hundred books.

Gospel of Thomas: 6) His disciples questioned him and said to him, “Do you want us to fast? How shall we pray? Shall we give alms? What diet shall we observe?” Jesus said, “Do not tell lies, and do not do what you hate, for all things are plain in the sight of heaven. For nothing hidden will not become manifest, and nothing covered will remain without being uncovered.”

ACIM: 14. God did not create a meaningless world.