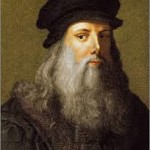 Every now and then go away, have a little relaxation, for when you come back to your work your judgment will be surer. Go some distance away because then the work appears smaller and more of it can be taken in at a glance and a lack of harmony and proportion is more readily seen.

Leonardo da Vinci, born on 15 April 1452 (Julian calendar), with Sun in Taurus, Moon in Pisces and Ascendant in Sagittarius (Neptune Libra conj. MC) Italian Renaissance polymath (Vinci, Florence,  April 15, 1452 – May 2, 1519). He is regarded as one of the greatest geniuses that ever lived on this planet. He designed several inventions that anticipated modern technology (helicopters, solar panels, calculator, tanks, etc.), realised outstanding progresses in the sutdy of anatomy, astronomy and enigineering, and produced some of the most popular paintings, such as the Mona Lisa (probably an anagram of the Egyptian fertility deities Amon and L’Isa, the Italian for Isis) and The Last Supper. In art he devised techniques such as chiaroscuro (contrasting light and darkness) and sfumato (smoky effect). In recent books, such as Holy Blood, Holy Grail, Leonardo is supposed to have served as leader of the Priory of Sion, a secret order whose mission was to keep the secret of Mary Magdalene and her marriage to Jesus alive. In his Last Supper Leonardo appears to leave clues about this secret. The disciple identified as John in the picture might actually be Mary Magdalene.

Although nature commences with reason and ends in experience it is necessary for us to do the opposite, that is to commence with experience and from this to proceed to investigate the reason.
Experience does not err. Only your judgments err by expecting from her what is not in her power.
I love those who can smile in trouble, who can gather strength from distress, and grow brave by reflection. ‘Tis the business of little minds to shrink, but they whose heart is firm, and whose conscience approves their conduct, will pursue their principles unto death.
In rivers, the water that you touch is the last of what has passed and the first of that which comes; so with present time.
Marriage is like putting your hand into a bag of snakes in the hope of pulling out an eel.
Nothing strengthens authority so much as silence.
Our life is made by the death of others.

The art of procreation and the members employed therein are so repulsive, that if it were not for the beauty of the faces and the adornments of the actors and the pent-up impulse, nature would lose the human species.
The function of muscle is to pull and not to push, except in the case of the genitals and the tongue.

Gospel of Thomas: (97) Jesus said, “The kingdom of the father is like a certain woman who was carrying a jar full of meal. While she was walking on the road, still some distance from home, the handle of the jar broke and the meal emptied out behind her on the road. She did not realize it; she had noticed no accident. When she reached her house, she set the jar down and found it empty.”