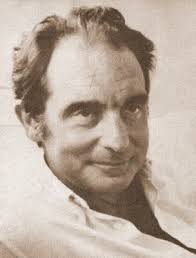 The hell of the living is not something that will be. If there is one, it is what is already here, the hell we live in every day, that we make by being together. There are two ways to escape suffering it. The first is easy for many: accept the hell, and become such a part of it that you can no longer see it. The second is risky and demands constant vigilance and apprehension: seek and learn to recognize who and what, in the midst of hell, are not hell, then make them endure, give them space.

Italo Calvino is one of the most popular Italian fantasy fiction writers, also widely read in Britain. He is also one of the celebrities listed above with Sun in Libra and Moon in Capricorn respectively, yet with Ascendant is in Scorpio. This gives him a 7.10 binary with elements of 7.8 and 8.10. He is a very familiar name in my Italian early formal education years for it was one of the authors, together with G. Salinari, of a three-volume school text (one for each of the three years of the Scuola Media). I remember this text in particular for it was the bulkiest and heaviest of all the books I had to carry in my school case. Some of the works that contributed to give him international fame are: Il visconte dimezzato (The Cloven Viscount): the story of a man split in two (a good half and an evil half) who becomes whole through his love for a peasant girl; Il barone rampante (The Baron in the Trees): a capricious tale of a 19th-century nobleman who one day decides to climb into the trees and never sets foot on the ground again, yet from the trees he participates fully in the affairs of his fellow men below. Il cavaliere inesistente (The Nonexistent Knight): a mock epic chivalric tale. Le città invisibili.

You need chaos in your soul to give birth to a dancing star.