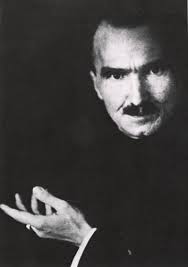 True teachers are those who use themselves as bridges over which they invite their students to cross; then, having facilitated their crossing, joyfully collapse, encouraging them to create their own.

Nikos Kazantzakis born on 18 February 1883 in Crete with Sun in Aquarius and Moon in Aries, he is regarded as the most important Greek writer and philosopher of the 20th century. The Odyssey: A Modern Sequel 1924-1938 is his most important work. Kazantzakis appeared as a tormented soul, constantly in search for knowledge and meaning, exploring the controversial relationship between man and God. He acquired wide fame after Michael Cacoyannis made his novel Zorba the Greek into a film. The story focuses on the relationship between mind and body exemplified by an intellectual (the narrator) and an uneducated man, Zorba, who drinks, works, loves and lives like a force of nature. Zorba doesn’t care about books and focuses on experience and understanding rather than cerebral learning. He is the celebration of instinctual life, yet with its won integrity and dignity. Also his The Last Temptation of Christ, placed on the Roman Catholic Index of Forbidden Books, became a movie by Martin Scorsese. The book features Christ as an existential hero and rebel against tradition, who wishes to avoid his divine mission until he is awakened by Judas, whom he calls his brother. Kzantzakis claims that in dealing with matter, the artist creates the “channel for the spirit” that is required if the “uphill path” is to be continued. In his view humanity must become “The Saviours of God”. His epitaph read “I hope for nothing. I fear nothing. I am free.” (11.2)

Beauty is merciless. You do not look at it, it looks at you and does not forgive.
Every perfect traveller always creates the country where he travels.
I expect nothing. I fear no one. I am free.
My entire soul is a cry, and all my work is a commentary on that cry.
Since we cannot change reality, let us change the eyes which see reality.
The real meaning of enlightenment is to gaze with undimmed eyes on all darkness.
There is only one woman in the world. One woman, with many faces.
Tell me what you do with the food you eat, and I’ll tell you what you are. Some turn their food into fat and manure, some into work and good humor, and others, I’m told, into God.
Every man has his folly, but the greatest folly at all, in my view, is not to have one.
It’s all because of doing things by halves, saying things by halves, that the world is in the mess is in today. Do things properly by God! One good knock for each nail and you’ll win through! God hates a halfdevil ten times more than an archdevil!
What a strange machine man is! You fill him with bread, wine, fish, radishes, and out of him come sighs, laughter and dreams. Like a factory. I’m sure there’s a sort of talking-film cinema in our heads.

Sri Ramakrishna: (11.12.10) 18 February 1836 – 16 August 1886, born with Sun in Aquarius, Moon in Pisces and Ascendant in Capricorn, he is one of the best known Indian saints on the 19th century. Ramakrishna was rather unorthodox and controversial in his time, as he did everything straight from the heart and with great enthusiasm. Already at an early age he had out of the ordinary experiences and connections with non-HAC realms. As a young priest he became so devoted to the goddess Kali that he felt he could not live any longer without seeing the goddess. Hence he demanded that the goddess appear to him, threatening to take his own life with a ritual dagger. Then the goddess appeared to him as an ocean of light: “When I jumped up like a madman and seized [a sword], suddenly the blessed Mother revealed herself. The buildings with their different parts, the temple, and everything vanished from my sight, leaving no trace whatsoever, and in their stead I saw a limitless, infinite, effulgent Ocean of Consciousness. As far as the eye could see, the shining billows were madly rushing at me from all sides with a terrific noise, to swallow me up. I was caught in the rush and collapsed, unconscious … within me there was a steady flow of undiluted bliss, altogether new, and I felt the presence of the Divine Mother.” His behaviour was most unpredictable and this worried his family. His parents found him a wife hoping his mental instability was a result of his celibacy. Ramakrishna treated his wife as the Universal Mother Herself. The true nature of their relationship was believed to be beyond the grasp of ordinary minds. Later a group of respected religious leaders convened that Ramakrishna’s madness was “spiritual madness” rather than ordinary madness. They concluded that this was a case of divine madness: Ramakrishna was literally mad for the vision of God.

A man is truly free, even here in this embodied state, if he knows that God is the true agent and he by himself is powerless to do anything.
Be not a traitor in your thoughts. Be sincere; act according to your thoughts; and you shall surely succeed. Pray with a sincere and simple heart, and your prayers will be heard.
Disease is the tax which the soul pays for the body, as the tenant pays house-rent for the use of the house.
God can be realized through all paths. All religions are true. The important thing is to reach the roof. You can reach it by stone stairs or by wooden stairs or by bamboo steps or by a rope. You can also climb up by a bamboo pole.
God is in all men, but all men are not in God; that is why we suffer.
If you must be mad, be it not for the things of the world. Be mad with the love of God.
Travel in all the four quarters of the earth, yet you will find nothing anywhere. Whatever there is, is only here.

Alessandro Volta (11.6) Sun in Aquarius, Moon in Virgo, born  February 18, 1745 in Como, Italian physicist known for the invention of the battery.

Louis Comfort Tiffany (11.5) Sun in Aquarius, Moon in Leo, born  February 18, 1848 in New York. American artist and designer who worked in the decorative arts and is best known for his work in stained glass.

ACIM: 49. God’s Voice speaks to me all through the day.

Gospel of Thomas: (41) Jesus said, “Whoever has something in his hand will receive more, and whoever has nothing will be deprived of even the little he has.