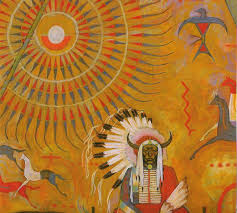 The long and winding road that leads to your door
Will never disappear,
I’ve seen that road before it always leads me here,
Leads me to your door.

Pure and absolute truth can only be found beyond all its possible expressions; these expressions, as such, cannot claim the attributes of this truth, their relative remoteness from it is expressed by their differentiation and multiplicity, by which they are strictly limited.

If Christ has been the only manifestation of the Word, supposing such a uniqueness of manifestation to be possible, the effect of His birth would have been the instantaneous reduction of the universe to ashes.

The reason for the existence of a religion, from one point of view at least, is to be found precisely in those things wherein it differs from other religions.

The truth is, however, that every religion form is superior to the others in a particular respect, and it is this characteristic that in fact indicates the sufficient reason for the existence of that form.

When people want to be rid of Heaven it is logical to start by creating an atmosphere in which spiritual things appear out of place; in order to be able to declare successfully that God is unreal they have to construct around man a false reality, a reality that is inevitably inhuman because only the inhuman can exclude God. What is involved is a falsification of the imagination and so its destruction.