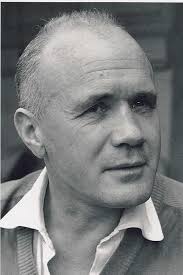 Man must dream a long time in order to act with grandeur, and dreaming is nursed in darkness.

Jean Genet: born on 19 December 1910 with Sun in Sagittarius, Moon in Leo and Ascendant in Leo, French dramatist. Genet was both a dramatist and a convicted thief. He was so addicted to stealing that he even thieved diamonds from his hostesses at literary receptions. His early novels were mainly autobiographical and celebrated thievery, homosexuality, prostitution  and the social underworld. In 1948 Genet was convicted of burglary for the 10th time, which according to French laws of those times it meant that he was condemned to automatic life imprisonment. Yet his works had gained so much academic attention that following a petition he was granted  release. Later Genet began to write for the theatre with plays set in prisons, brothels and other obscure scenarios. Sartre defined Genet as the archetype of the existentialist man, whose distinction between good and evil is the result of personal choices and decisions, rather than being the victim of polarity. His plays are overt interactions between binaries: illusion and reality, life and death, good and evil, right and wrong, strong and weak, conscious and unconscious. Shocking and apparently immoral, his plays are sacred cathartic ritual, which support the audience’s release of grievances. Just like in the second stage of the Basic Ritual of the Sacred Cone, they provide opportunities for shamanic composting and multi-dimensional healing.

One may argue how such dark themes fit with the luminosity of Sagittarius and Leo. Isn’t it Scorpio that deals with darkness? This may be true, yet first of all we are still in the gap between Scorpio and Sagittarius. Secondly, though most importantly, with Scorpio darkness tends to remain in the darkness, inside the cave, in the composting chamber. Then comes a moment in which darkness has to emerge, when composting reaches the climax. How do you know it? Well, it is very simple, in that moment it is not possible to move further into the darkness: grievances reach their peak. On one hand this is when I would prefer to hide even more in the darkness, on the other that is not possible anymore. Darkness itself forces me to move out of the cave since the bardo is coming to an end. The womb is no longer available to shelter me and either I succumb with the womb or get out into a novel configuration. Once I move on what was once inside the cave becomes visible

With Sagittarius, darkness is finally visible, the compost is ripe and available for fertilising an intent of light.

Now it is the time to be visible, to go on stage, to face the limelight. This is what Genet, a 9.5.9 triumph of visibility and fire, and other enlightened Sagittarius souls did and do. Here the Sagittarian hero keeps the memory of where it comes from. Although he may provisionally transit a more luminous zone, she does not betray his ancestors and maintain the promise of conveying their dark calling to the light. And these are the honourable Sagittarian shamans. Blessings on them!

Quotes from Genet:
So long as we were in a room in a brothel, we belonged to our fantasies, but once having exposed them, we’re now tied up with human beings, tied to you and forced to go on with this adventure according to the laws of visibility.
Crimes of which a people is ashamed constitute its real history. The same is true of man.
Perhaps all music, even the newest, is not so much something discovered as something that re-emerges from where it lay buried in the memory, inaudible as a melody cut in a disc of flesh. A composer lets me hear a song that has always been shut up silent within me.
Creare non è un gioco un po’ frivolo. Il creatore si è impegnato in un’avventura terribile, che è di assumere su di sé, fino in fondo, i pericoli che corrono le sue creature.

Édith Piaf: (9.3.8) born on 19 December 1915 with Sun in Sagittarius, Moon in Gemini and Ascendant in Scorpio, she was one of the most loved French singers and legends. Abandoned by her mother, she was raised by her grandmother, who ran a brothel in Normandy. From the age of three to seven she was blind. She recovered her sight after her grandmother’s prostitutes went on a pilgrimage to Saint Thérèse de Lisieux. Later she became a street singer in Paris, until she was discovered by the nightclub and music scene. She shortly achieved popularity and made friends with prominent people. She wrote the lyrics of many of her songs, and also collaborated with composers. Her signature song, “La vie en rose” was written in the middle of German occupation. Singing for high-ranking Germans earned Piaf the right to pose for photos with French prisoners of war. Once in possession of such photos, prisoners were able to cut out their own images and use them in forged papers as part of escape plans. At the early age of forty-seven, Piaf died of on the same day as her friend Jean Cocteau. Although forbidden a mass by the Roman Catholic archbishop of Paris (due to her lifestyle), her funeral procession drew an unprecedented mass of mourners onto the streets. Her life was abundant with sharp contrasts: gloriuous fame and tragic personal life, fragile physical features figure and impressive voice.

Non, Je Ne Regrette Rien (I Have No Regrets)