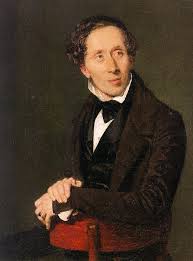 “Does all the beauty of the world stop when you die?”
“No,” said the Old Oak; “it will last much longer – longer than I can even think of.”
“Well, then,” said the little May-fly, “we have the same time to live; only we reckon differently.”

Hans Christian Andersen:  born on 2 April 1805 in Odense (Denmark), with Sun in Aries, Moon in Pisces and Ascendant in Sagittarius, he is one of the most popular author of fairy tales, among which are The Ugly Duckling, The Emperor’s New Clothes, The Snow Queen, The Red Shoes, and The Little Mermaid. A sense of non-HAC alienation is typical of most of his works.

Giacomo Casanova  (1.9.8) Sun Aries, Moon Sagittarius, Ascendant Scorpio, Italian adventurer, writer, secret agent (Venice, Italy,  April 2,  1725 – 4 June 1798)  known mainly for his libertine non-HAC enterprises and ardent loves. At age 30, he was accused of witchcraft and sentenced to five years imprisonment in a Venetian notorious prison from which he managed to escape. Casanova’s main work is his autobiography. He also wrote a multi-dimensional work (L’Icosameron), where brothers and sisters spend 81 years inside the Earth, meet strange creatures called Mégamigres, and mate in the new Eden.

George MacDonald Fraser, OBE (2 April 1925 – 2 January 2008)[1] was an English-born author of Scottish[2] descent, who wrote both historical novels and non-fiction books, as well as several screenplays. He is best known for his Flashman series of historical novels, purportedly written by Harry Flashman, a fictional coward and bully originally created by Thomas Hughes in Tom Brown’s School Days. The novels are presented as packets of memoirs written by the nonagenarian Flashman, who looks back on his days as a hero of the British Army during the 19th century. The series begins with Flashman, and is notable for the accuracy of the historical settings and praise from critics. P.G. Wodehouse said of Flashman, “If ever there was a time when I felt that ‘watcher-of-the-skies-when-a-new-planet’ stuff, it was when I read the first Flashman.” The series also mentions Richard Burton repeatedly (with the narrator, Flashman, usually referring to him as “that rogue Dick Burton”).

Saint Mary Magdalene of Pazzi (or Maria Magdalena de Pazzi; April 2, 1566 – May 25, 1607) is an Italian Carmelite mystic and saint of the Roman Catholic Church.

ACIM: 92. Miracles are seen in light, and light and strength are one.

Gospel of Thomas: (84) Jesus said: When you see your likeness, you rejoice; but when you see your images which came into being before you — they neither die nor are made manifest — how much will you bear?