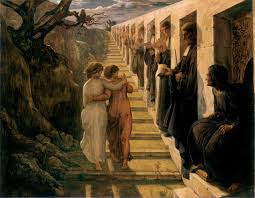 When we lay aside our prejudices, false certainties and dogmas regarding who we are, our life fills with luminous innocence. When we admit that we don’t truly know where we are going nor where we come from, we intimately align with all living creatures. Then each of your breath becomes a step towards the unknown, which we take alone and together. And you can rest assured that the unknown, touched by our innocence, sooner or later, is bound to unveil itself. (Franco Santoro)

They won’t listen. Do you know why? Because they have certain fixed notions about the past. Any change would be blasphemy in their eyes, even if it were the truth. They don’t want the truth; they want their traditions.

ov, born on  2 January 1920, Sun in Capricorn, Moon in Taurus, Ascendant in Gemini (10.2.3), died 6 April 1992, American author and professor of biochemistry, best known for his works of science fiction and popular science. One of the most prolific writers of all time. Quotes: Those people who think they know everything are a great annoyance to those of us who do. No sensible decision can be made any longer without taking into account not only the world as it is, but the world as it will be. I feel that the longest and worst punishment should be reserved for those who slandered God by inventing Hell.

Peter Redgrove, British poet (2 January 1932-d. 2003) “The mystery religions were instituted in order to protect the marvels of the commonplace from those who would devalue them.”

2 February 1988 is another memorable date in the Provordo for it marks the second stage of the institution of the Anaghaseva, through the issue of the Supply Vicar, A.F.S. Bogus’ letter, which appears at page 5 of the Provordo Etnai Sagdhanatabe (see picture). With this letter the Supply Vicar, in its function of Higher Delegate, grants third-dimensional visibility to the Sacred Cone Seed via the publication of the Provordo Etnai Sagdhanatabe themselves, and refers to the controversial rekonditus kanunes, which are briefly outlined in the Concise Epitome of the Compendium of the Sacred Cone.

A further relevant date, completing this first trinity of dates, is 5 April 1988, marking the Prasampadake Bhumika, the introduction to the Provordo Etnai Sagdhanatabe, finally published on18 April 1988.

The Third Stage is also exemplified by the publication of a third copy of the Provordo Etnai Sagdhanatabe and its official public visibility as from 2 January 2012 at Provordo Jesi.

The Day of the Amissiv Kareka is celebrated by inviting Pahai Sadoh, into a reproductive enterprise, which involves the insemination of 1A, 1B and 1C. Such enterprise entails the coming together of humans, of both genders, including also the whole third-dimensional visible reality, as one single polarity in relationship with the Void and unseen reality.

In order for this unseen reality, the Void, to come (in all senses), we need to turn it on, bearing in mind that for this purpose, besides being naked, we also require not to be alone. Hence the larger the group and nudity, the larger are the chances to make it.

Please bear in mind that this is a Solemnity of the Second Day, which is related to the Second Stage of the Basic Ritual of the Sacred Cone, hence rather cathartic. Unless there is a firm adherence to the Intention and a firm ritual structure events and interactions can easily go out of balance.