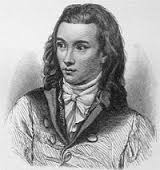 We are close to waking when we dream that we are dreaming.

Novalis, born on 2 May 1772, German poet, author and philosopher, Sun and Moon in Taurus, Ascendant in Cancer.

Humanity is a comic role.

The imagination places the world of the future either far above us, or far below, or in a relation of metempsychosis to ourselves. We dream of traveling through the universe—but is not the universe within ourselves? The depths of our spirit are unknown to us—the mysterious way leads inwards. Eternity with its worlds—the past and future—is in ourselves or nowhere. The external world is the world of shadows—it throws its shadow into the realm of light. At present this realm certainly seems to us so dark inside, lonely, shapeless. But how entirely different it will seem to us—when this gloom is past, and the body of shadows has moved away. We will experience greater enjoyment than ever, for our spirit has been deprived.

Marco Pannella: born in Teramo on 2 May 1930, with Sun in Taurus, Moon in Gemini and Ascendant in Pisces, Pannella is one of the most controversial and non-ordinary Italian political leaders. He is one of the first promoters of the “Green” and “ecologist” political movements in Europe, and the Founder of the Italian Partito Radicale. He has been at the forefront of the promotion important reforms regarding lagalisation of soft drugs and psycotropic plants, facing incarceration on various occasions for his civil disobediences. He played a prominent role for the legalization of abortion in the early 1980s. Since the 60s, Pannella has promoted a large amount of civil rights initiatives and a series of referenda on themes ranging from social to political issues, in particular on those relating to the legality of the State, the rule of law and to the administration of justice. A believer in Gandhian non-violence, Pannella has carried out several hunger strikes in Italy and elsewhere to defend civil rights and to end extermination through starvation the world over. In 2002, in an action of civil disobedience, he went to a Manchester police station delivering a small amount of hashish and marijuana. Contrarily to what happened to civil rights activists, Pannela was not arrested and created the first case of non conviction for drugs possession in England. In a statement issued on the occasion of his non arrest, Mr. Pannella declared that “What happened today to me will grant other British citizens the same type of rights. I would like to thank the police that has granted those rights to the citizens, rights that the law does not foresee”.

Satyajit Ray, born on 2 May 1921, with Sun in Taurus, Moon in Pisces, Indian director, composer and writer.

Gottfried Benn, born on 2 May 1886, German poet and writer, with Sun in Taurus, Moon in Aries, Ascendant in Scorpio.