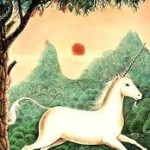 The true secret in being a hero lies in knowing the order of things… Things must happen when it is time for them to happen.

I am the only Unicorn there is? The Last? … That cannot be. Why would I be the last? What do men know? Because they have seen no unicorns for a while does not mean we have all vanished. We do not vanish. … There has never been a time without unicorns. We live forever! We are as old as the sky, old as the moon! We can be hunted, trapped; we can even be killed if we leave our forests, but we do not vanish. … Am I truly the last?

Gospel of Thomas: (102) Jesus said, “Woe to the pharisees, for they are like a dog sleeping in the manger of oxen, for neither does he eat nor does he let the oxen eat.”

Concise Epitome: 11.1 The Champions resolved to leave in search of darkness, and for this purpose they started an intense training in the star of Kallex, by the homonymous Rock (I Campioni accolsero di salpare alla ricerca del buio, così che a tale proposito instradarono un circostanziato ammaestramento nell’astro di Kallex, presso l’omonima Rocca).