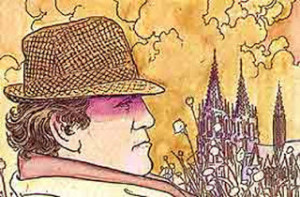 What is an artist? A provincial who finds himself somewhere between a physical reality and a metaphysical one. It’s this in-between… this frontier country between the tangible world and the intangible one, which is really the realm of the artist.

Fellini’s works are full of multidimensional and shamanic references. Turin magician Gustavo Rol introduced him to the world of Spiritism and séances. He also experimented with LSD 25 “objects and their functions no longer had any significance. All I perceived was perception itself, the hell of forms and figures devoid of human emotion and detached from the reality of my unreal environment. I was an instrument in a virtual world that constantly renewed its own meaningless image in a living world that was itself perceived outside of nature. And since the appearance of things was no longer definitive but limitless, this paradisiacal awareness freed me from the reality external to my self. The fire and the rose, as it were, became one.” Long fascinated by Carlos Castaneda’s The Teachings of Don Juan: A Yaqui Way of Knowledge, Fellini accompanied the Peruvian author on a journey to the Yucatán to assess the feasibility of a film. Then Castaneda inexplicably disappeared and the project fell through, though Fellini’s mystico-shamanic adventures, titled Viaggio a Tulun (Trip to Tulum) were published in 1989 as a graphic novel with artwork by Milo Manara. “Life is a combination of magic and pasta.”

One amongst many significant scenes in Fellini’s movies is from Nights of Cabiria (1957), an epic romance in which the protagonist (Cabiria) moves through the three stages of Intention, Release and Healing. Upon finding the man of her dreams, she sells away all her material wealth so as to be with him. In the final scene below he steals all her money and abandons her. Cabiria goes through tremendous pain and despair, which then turns into a deep peace and inner joy.

Quotes by David Lynch:
All the movies are about strange worlds that you can’t go into unless you build them and film them. That’s what’s so important about film to me. I just like going into strange worlds.
There’s this beautiful ocean of bliss and consciousness that is able to be reached by any human being by diving within, which is really peaceful and harmonious and can be enlivened by the group process. This group is a peace-creating group. It saturates the atmosphere. This is all about establishing peace. Right now, we gotta get peace back in the world. Peace is a real thing.
There’s so many problems in our world, so much negativity. Don’t worry about the darkness — turn on the light and the darkness automatically goes. Ramp up the light of unity within — help do that for yourself, help do that for the world and then we’re really doing something, we’re doing something that brings that light of unity.
Dark things have always existed but they used to be in a proper balance with good when life was slower. People lived in towns and small farms where they knew everybody and people didn’t move around so much so things were a little more peaceful. There were things that they were afraid of for sure, but now it’s accelerated to where the anxiety level of the people is in the stratosphere. TV sped things up and caused people to hear way more bad news. Mass media overloaded people with more than they could handle, and drugs also had a lot to do with it. With drugs people can get so rich and whacked out and they’ve opened up a whole weird world. These things have created a modern kind of fear in America.
Being in darkness and confusion is interesting to me. But behind it you can rise out of that and see things the way the really are.

Ernesto Cardenal, (10.9) Nicaraguan theologian and politician 20 January 1925, one of the most famous liberation theologians of the Nicaraguan Sandinistas,

Gospel of Thomas: (12) The disciples said to Jesus, “We know that you will depart from us. Who is to be our leader?” Jesus said to them, “Wherever you are, you are to go to James the righteous, for whose sake heaven and earth came into being.”