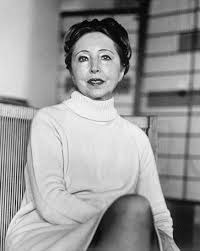 Anaïs Nin: born on 21 February 1903, with Sun in Pisces, Moon in Capricorn and Libra Ascendant, died 14 January 1977. Anaïs Nin is considered as the first writer of female erotica. As it is typical with Pisces plus Capricorn oriented folks, her books were and still are major bestsellers. In her alluring diaries she wrote about her incestuous relationship with her father, her passionate love affair and friendship with Miller and his wife, June, and her connections with artists and intellectuals. What follows is an excerpt from her diaries, describing female orgasm:

The entire mystery of pleasure in a woman’s body lies in the intensity of the pulsation just before the orgasm. Sometimes it is slow, one-two-three, three palpitations which then project a fiery and icy liqueur through the body. If the palpitation is feeble, muted, the pleasure is like a gentler wave. The pocket seed of ecstasy bursts with more or less energy, when it is richest it touches every portion of the body, vibrating through every nerve and cell. If the palpitation is intense, the rhythm and beat of it is slower and the pleasure more lasting. Electric flesh-arrows, a second wave of pleasure falls over the first, a third which touches every nerve end, and now the third like an electric current traversing the body. A rainbow of color strikes the eyelids. A foam of music falls over the ears. It is the gong of the orgasm. There are times when a woman feels her body but lightly played on. Others when it reaches such a climax it seems it can never surpass. So many climaxes. Some caused by tenderness, some by desire, some by a word or an image seen during the day. There are times when the day itself demands a climax, days of which do not end in a climax, when the body is asleep or dreaming other dreams. There are days when the climax is not pleasure but pain, jealousy, terror, anxiety. And there are days when the climax takes place in creation, a white climax. Revolution is another climax. Sainthood another.

I will not be just a tourist in the world of images, just watching images passing by which I cannot live in, make love to, possess as permanent sources of joy and ecstasy.

Our life is composed greatly from dreams, from the unconscious, and they must be brought into connection with action. They must be woven together.

There are many ways to be free. One of them is to transcend reality by imagination, as I try to do.

Patricia Telesco (12.9) (21 February 1960) American author, herbalist, poet, lecturer, Wiccan priestess, and folk magician who has written more than 60 books on a variety of subjects ranging from self-help and cookbooks to magic, folklore and global religion.