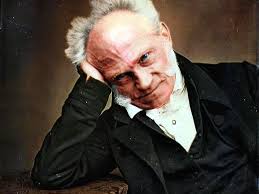 The Universe is a dream dreamed by a single dreamer where all the dream characters dream too.

Arthur Schopenhauer born 22 February 1788, Sun in Pisces, Moon in Virgo, Ascendant in Cancer,
(died 21 September 1860) was a German philosopher known for his pessimism and philosophical clarity. At age 25, he published his doctoral dissertation, On the Fourfold Root of the Principle of Sufficient Reason, which examined the four separate manifestations of reason in the phenomenal world.

Luis Buñuel was born in Calanda (Spain) with Sun in Pisces, Moon in Sagittarius and Ascendant in Gemini. (born 22 February 1900, died 29 July 1983). His early films, featuring most surreal, controversial and non-HAC contents, provoked scandals and caused audiences to riot. In L’Age d’Or (1930), co-scripted by Salvador Dali, he depicts a couple having sex and being continually disturbed by the intrusions of official HAC representatives (police, priests, bureaucrats, etc.). One of my early Buñuel’s favourites was Simon of the Desert, which is about a 5th century ascetic standing on the top of a column in relentless prayer and being tempted by the devil in the form of a woman with a beard. His later movies were much more infamous and became the target of Church’s fury, although nowadays one can find Buñuel’s DVDs on sale even in official Catholic bookshops. The movie Viridiana, which contains a provocative parody of the Last Supper and other outrageous scenes, was a major HAC disruption and trick. Franco (Spain’s “dictator”) invited Buñuel to make a government-subsidized film. Buñuel submitted the script of Viridiana to the Spanish censors, but did not make any of the changes they requested and left his film as it was. The Spanish government sent it to the Cannes film festival without being previewed, and the movie won the Palme D’Or. This caused a major scandal, yet Buñuel managed to create the film he wanted and received acknowledgement for it. Other relevant movies were Belle de Jour, That Obscure Object of Desire, The Discreet Charm of the Bourgeoisie,The Phantom Of Liberty and The Milky Way. Buñuel was a master in disrupting HAC with all kinds of tricks and surreal nonsense aimed at allowing the absurdity of consensus reality to emerge in all its glory.

Fortunately, somewhere between chance and mystery lies imagination, the only thing that protects our freedom, despite the fact that people keep trying to reduce it or kill it off altogether.

Poor workers! First they’re cuckolded, and, as if that weren’t enough, then they’re beaten! Work’s a curse, Saturno. I say to hell with the work you have to do to earn a living! That kind of work does us no honour; all it does is fill up the bellies of the pigs who exploit us. But the work you do because you like to do it, because you’ve heard the call, you’ve got a vocation – that’s ennobling! We should all be able to work like that. Look at me, Saturno – I don’t work. And I don’t care if they hang me, I won’t work! Yet I’m alive! I may live badly, but at least I don’t have to work to do it!

All my life I’ve been harassed by questions: Why is something this way and not another? How do you account for that? This rage to understand, to fill in the blanks, only makes life more banal. If we could only find the courage to leave our destiny to chance, to accept the fundamental mystery of our lives, then we might be closer to the sort of happiness that comes with innocence.

You have to begin to lose your memory, if only in bits and pieces, to realize that memory is what makes our lives. Life without memory is no life at all, just as an intelligence without the possibility of expression is not really an intelligence. Our memory is our coherence, our reason, our feeling, even our action. Without it, we are nothing.

If someone were to prove to me right this minute that God, in all his luminousness, exists, it wouldn’t change a single aspect of my behaviour.

In the name of Hypocrites, doctors have invented the most exquisite form of torture ever known to man: survival.

God and Country are an unbeatable team; they break all records for oppression and bloodshed.

Give me two hours a day of activity, and I’ll take the other twenty-two in dreams.

I can only wait for the final amnesia, the one that can erase an entire life.

Dan Millman (12.8.9) born February 22, 1946, American author and lecturer in the personal development field and “human potential movement”. Author of 17 books published in 29 languages. In 2006, his first book, Way of the Peaceful Warrior, was adapted to a film, Peaceful Warrior.

Sybil Leek (22 February 1917 – 26 October 1982) English witch, astrologer, occult author and self-proclaimed psychic. She wrote many books on occult and esoteric subjects, getting dubbed as “Britain’s most famous witch” by the BBC.

Pahekarubhe Tabe: At times you eat, at times you are being eaten. You need to accept this.

12.6 – 220297: On this great day, with this ravishing Full Moon in Virgo, I celebrate. And I feel an extraordinary white light radiating from my centre, Urai Sadoh, wherever and whenever. And in opening the circle, for each direction or element I envisage representatives of Sectors. This white energy reaches everywhere and everybody: past, present and future situations and persons. It’s a major dance of love and power. With this great practice I take everything back. I sing the Asteroid Chant. Whatever has been divided is being reunited. A great variety of energies emanating from the same centre, becoming a whole. First, watching and considering the differences, happily classifying all kinds of characters, seeing their own place in the universe. Then, finding the point of emanation, the very same tree which shows up the basic unity. That’s a meditation and vision for S6. I’m going to receive the name of the Spirit of Sector 6. Urai Sadoh stay with me, there’s nothing but you, you’re the Gate. Teach me how to be a sacred cell within a most sacred body. Teach me how to expand this vision of light. Stay with me, Urai Sadoh. My heart is full of ecstasy as you are with me, and with you I can go whenever and wherever, I can face whatever and whoever. Urai Sadoh, stay with me every moment in all deeds. The dream is becoming a reality, and what is radiating inside is taking form outside and more and more the world I see become a place of delight, a paradise, a place of power. I accept this challenge to see the real face of the world, the face of Urai Sadoh, my loving Guide. The time has come for the great vision of Pisces to be grounded into Virgo, to be given form and be tangible. The time is ripe for the dream to be real and part of this life. We, as a team, are determined to get to this. All our deeds are aimed at this basic Intent that dwells in our heart. We’ll get at it with the sacred help of the Guide and all possible sacred alliances known and unknown. We go, we go and we see beyond until we get to that dwelling place. We’re determined to find the space of light wherever we go and wander in this life. We’re the heroes of this age: a new age of understanding, reawakening and transformation. And we go and clean, that’s our function. And in this cleaning we rejoice. We don’t care where the dirt comes from. That’s not our business. We clean whatever, whenever and wherever forever. We enjoy the period of cleanliness and when the dirt comes again, we clean again. That’s our function and we’ll go on with this as long as it is required of us. We are joyful to clean. When the cleaning is finished we go somewhere else and continue cleaning. We don’t care about the waste, we let it go through the Sacred Cone. We celebrate what is being received out of this exchange. We allow all dirt to be used for the universal purpose. We do that! And find our ecstasy of sacred cleaners. This dance continue all the time in every Sector. I’m going to meet the Spirit of Sector 6 with the Bear posture. Oh sacred Bear, let me use your posture to meet my Guide in S6. She appears by the Great Tree. She knows how to distinguish the energies. She invites me to protect and take care of this wisdom.