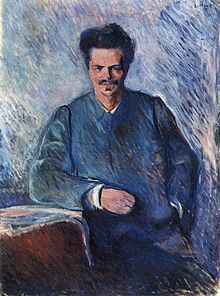 This is finally solitude: to spin oneself into the silk of one’s own soul, become a cocoon and wait for the metamorphosis, for that will not fail to come. In the meantime one lives on one’s experiences, and telepathically one lives the lives of others… At last one is one’s own master. Nobody’s thoughts control mine, nobody’s likes, caprices pressure me. Now the soul begins to grow in newly gained freedom, and one experiences a great inner peace and a quiet joy and a feeling of security and self-responsibility.

August Strindberg, born in Stockholn on 22 January 1849 with Sun in Aquarius, Moon and Ascendant in Capricorn, died in 1912, (11.10.10) he is considered as one of the fathers of modern theater.  The most important plays of his early years, such as The Father, Miss Julie and the The Stronger, detail his turbulent rapport with women and the forlorn nature of human relationships.  A later period of spiritual emergency and inner turmoil led to the production of his autobiographical book, Inferno. This is a story of the painful exploration of the bardo gap between ordinary reality and the multidimensional, which in the end leads to clarity and transformation. Inferno depicts the darkest peaks of Strindberg’s journey:  “I had been reading the precious little pamphlet The Delight of Dying and it aroused a longing to leave this world. In order to investigate the borderland between life and death. I lie down on bed, uncork the bottle of cyanide and let its deadly fumes fill the room. He is coming closer, the Reaper, so mild and seductive, but at the last moment someone always appears or something happens that cuts everything off. The waiter has an errand, a wasp flies in through the window. The Powers refuse me this one and only happiness, and I bow to their will.”

Strindberg also confronts the issue of conventional versus expanded perception of reality:  “If I see my pillow taking on human shapes, then those shapes are there, and if someone says that they are only (!) generated by imagination, I will reply: Only you say? – What my inner sees, is more to me! And what I see in that pillow is made out of the feathers of birds, which once were carriers of life, with a soul, with the power to create forms, and out of linen which once carried the life force in its fibres, reality, since I am able to draw these forms and show them to others. There are times when I hear a cricket singing inside that pillow. The sound made by the grasshoper has always seemed to me as if it came from some empty hall down below, underneath the surface of the earth. Now, assume that these once sang in a field of flax, do you not believe that Nature or the Creator could use the vegetable fibre as a phonograph, so that it plays to my inner ear which trough suffering, deprivation and prayer has become willing to hear farter than before? But that is where natural explanations do not suffice, and I abandon them instantly!! ”

I dream, therefore I exist.

We are already in Hell. It is the earth itself that is Hell, the prison constructed for us by an intelligence superior to our own, in which I could not take a step without injuring the happiness of others, and in which my fellow creatures could not enjoy their own happiness without causing me pain.”

And why does man weep when he is sad? I asked at last—Because the glass in the eyes must be washed now and then, so that we can see clearly, said the child.

Everything can happen, everything is possible and probable. Time and place do not exist; on a significant bases of reality, the imagination spins, weaving new patterns; a mixture of memories, experiences, free fancies, incongruities and improvisations.

Love between a man and woman is war. 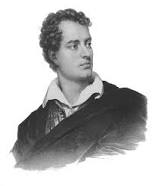 ot a joy the world can give that it takes away / When the glow of early thought declines in feeling’s dull decay, / ‘Tis not on youth’s smooth cheek the blush alone, which fades so fast, / But the tender bloom of heart is gone, ere youth itself be past.

Lord Byron: born on 22 January 1788 with Sun in Aquarius, Moon (conjunct Uranus) and Ascendant in Cancer, (11.4.4) is the most controversial, eccentric and flamboyant Romantic poet and satirist. Byron was famous for his non-ordinary love affairs and for devising the configuration of the “Byronic hero”, inspired by an intimate, deep rooted and poignant past, suffering exile, exhibiting great passion (Cancer) and having a distaste for conventional society, rebelling, expressing lack of respect for rank and privileges, having genius (Aquarius). He was born with a club-foot, yet with a most magnetic, beautiful, shape-shifting and out of the ordinary body. He was only 5 feet 8 1/2 inches tall and his widely varying weight ranged from 137 to 202 pounds. He spent his early childhood years in poor surroundings in Aberdeen, before inheriting the title and property of his great-uncle, which allowed him to move to Harrow and Cambridge. “She Walks in Beauty” is a famous poem Byron wrote in 1814 in 1814 by Lord Byron. It describes a woman of much beauty and elegance, told from the view point of a third person. Byron had a great fondness for animals. He kept a bear while he was a student at Trinity College in Cambridge, as a way of rebelling against Trinity rules forbidding pet dogs, and also suggested that the bear apply for a college fellowship. At other times in his life, Byron also kept foxes, monkeys, parrots, cats, eagles, crows, falcons, peacocks, guinea hens, cranes, badgers, geese, and herons. In 1809 he took his seat in the House of Lords reached poetic success from 1812 when he published Childe Harold’s Pilgrimage and later The Corsair. Byron regarded sex as artistic performance and craved for alternative sexual enterprises, such as triangles and any kind of unconventional rapport. In this respect he was all-inclusive and addressed boys, siblings, and women of all classes. In the end he was forced to live abroad to escape the social effects of his scandalous life. He settled in Switzerland  where he became friends with the poet Shelley, and his future wife. He then moved to Venice, where it was rumoured that he had more than 200 mistresses. He also operated as the cavaliere servente (the acknowledged lover of a married-woman, attending to her every need and desires) of Teresa Guiccioli, the young wife of an elderly Italian count.

She walks in beauty, like the night
Of cloudless climes and starry skies;
And all that’s best of dark and bright
Meet in her aspect and her eyes:
Thus mellowed to that tender light
Which heaven to gaudy day denies.

One shade the more, one ray the less,
Had half impaired the nameless grace
Which waves in every raven tress,
Or softly lightens o’er her face;
Where thoughts serenely sweet express,
How pure, how dear their dwelling-place.

And on that cheek, and o’er that brow,
So soft, so calm, yet eloquent,
The smiles that win, the tints that glow,
But tell of days in goodness spent,
A mind at peace with all below,
A heart whose love is innocent!

Quotes by Lord Byron:
A celebrity is one who is known to many persons he is glad he doesn’t know.
All who joy would win must share it. Happiness was born a Twin.
And yet a little tumult, now and then, is an agreeable quickener of sensation; such as a revolution, a battle, or an adventure of any lively description.
As long as I retain my feeling and my passion for Nature, I can partly soften or subdue my other passions and resist or endure those of others.
Be thou the rainbow in the storms of life. The evening beam that smiles the clouds away, and tints tomorrow Between two worlds life hovers like a star, twixt night and morn, upon the horizon’s verge.
Every day confirms my opinion on the superiority of a vicious life – and if Virtue is not its own reward I don’t know any other stipend annexed to it.
I have great hopes that we shall love each other all our lives as much as if we had never married at all.
Lovers may be – and indeed generally are – enemies, but they never can be friends, because there must always be a spice of jealousy and a something of Self in all their speculations.
Man’s love is of man’s life a part; it is a woman’s whole existence. In her first passion, a woman loves her lover, in all the others all she loves is love.
Posterity will never survey a nobler grave than this: here lie the bones of Castlereagh: stop, traveler, and piss.
There is something pagan in me that I cannot shake off. In short, I deny nothing, but doubt everything.
To have joy one must share it. Happiness was born a twin.
To withdraw myself from myself has ever been my sole, my entire, my sincere motive in scribbling at all.
What a strange thing is the propagation of life! A bubble of seed which may be spilt in a whore’s lap, or in the orgasm of a voluptuous dream, might (for aught we know) have formed a Caesar or a Bonaparte – there is nothing remarkable recorded of their sires, that I know of.
What an antithetical mind! – tenderness, roughness – delicacy, coarseness – sentiment, sensuality – soaring and groveling, dirt and deity – all mixed up in that one compound of inspired clay!

Grigori Rasputin, (11.2.8) Sun Aquarius, Moon Taurus, Ascendant Scorpio, (22 January 1869-d. 1916) Russian monk, controversial healer and psychic. He has been the subject of a variety of media since his death.

Beverley Ann Mitchell (11.6), born January 22, 1981, is an American actress and country music singer. Known for her role as Reverend Lucy Camden-Kinkirk on the television series 7th Heaven. Sun in Aquarius, Moon in Virgo.

Gospel of Thomas: (14) Jesus said to them, “If you fast, you will give rise to sin for yourselves; and if you pray, you will be condemned; and if you give alms, you will do harm to your spirits. When you go into any land and walk about in the districts, if they receive you, eat what they will set before you, and heal the sick among them. For what goes into your mouth will not defile you, but that which issues from your mouth – it is that which will defile you.”