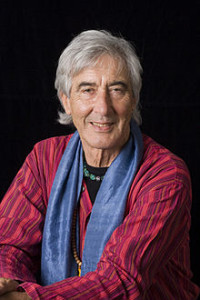 The power of the mind created the machine and the artificial time that governs our lives. Returned to itself, the power of the mind can ultimately heal all things. The power of a hundred thousand minds synchronized as a single planetary consciousness focused on a single point could alter the evolution of our mind and spirit irrevocably while providing us with the knowledge, insight and telepathic skills to turn our crisis into the second creation.

José Arguelles born on 24 January 1939, Sun in Aquarius, Moon in Pisces, Ascendant in Leo, (died 23 March 2011), 11.12.5, world-renowned author, artist, visionary and educator, best know for his role in initiating the Harmonic Convergence global peace meditation in August 1987. He was the founder of Planet Art Network and the Foundation for the Law of Time, which is described in Time and the Technosphere (2002). He is also the first who introduced the date December 21, 2012 into mass consciousness. For Argüelles the 12-month Gregorian calendar and the 60-minute hour is a construct that arbitrarily regulates human life and operates disconnected from  the natural “synchronic order”. He promotes the release of the Gregorian calendar and its replacement with a thirteen moon, 28 day calendar, so as to “get the human race back on course”. “Time and again human consciousness fixates, and slams the door on its greatest gift, the open-endedness of infinite possibility. As a result we do not experience reality but merely our concept of it.”

Michio Kaku (11.12.6, Uranus cjn MC) b. January 24, 1947, American theoretical physicist, specializing in string field theory, futurist.. He is a popularizer of science, host of TV and radio programs, and a best-selling author: Hyperspace: A Scientific Odyssey through Parallel Universes, Time Warps, and the Tenth Dimension (1994), Parallel Worlds: A Journey through Creation, Higher Dimensions, and the Future of the Cosmos (2004), Physics of the Impossible (2008), Physics of the Future (2011), and The Future of the Mind (2014).

“Beyond work and love, I would add two other ingredients that give meaning to life. First, to fulfill whatever talents we are born with. However blessed we are by fate with different abilities and strengths, we should try to develop them to the fullest, rather than allow them to atrophy and decay. We all know individuals who did not fulfill the promise they showed in childhood. Many of them became haunted by the image of what they might have become. Instead of blaming fate, I think we should accept ourselves as we are and try to fulfill whatever dreams are within our capability.

Second, we should try to leave the world a better place than when we entered it. As individuals, we can make a difference, whether it is to probe the secrets of Nature, to clean up the environment and work for peace and social justice, or to nurture the inquisitive, vibrant spirit of the young by being a mentor and a guide.”

E.T.A.Hoffmann (11.12.8) Sun in Aquarius, Moon in Pisces, Ascendant in Scorpio (Ernst Theodor Amadeus Hoffmann), (24 January 1776 – 25 June 1822), German Romantic author of fantasy and horror, jurist, composer, draftsman and caricaturist. He is the subject and hero of Jacques Offenbach’s opera The Tales of Hoffmann, and the author of the novelette The Nutcracker and the Mouse King, on which the famous ballet The Nutcracker is based. The ballet Coppelia is based on two other stories that Hoffmann wrote. Also Schumann’s Kreisleriana is based on one of Hoffmann’s characters.

ACIM: 24. I do not perceive my own best interests.

Concise Epitome: 3.8 The fact of having grown up to the maximum possible luminosity was an imposing accomplishment for the Sphere of Light. (Tale occorrenza fu un compimento di colossale portata per la Sfera di Luce, nella sua interezza s’intende.)

RC Saints: St Francis de Sales, “The measure of love is to love without measure.”  “Have patience with all things, but chiefly have patience with yourself. Do not lose courage in considering your own imperfections, but instantly set about remedying them – every day begin the task anew.”  Do not wish to be anything but what you are, and try to be that perfectly.”  “Never be in a hurry; do everything quietly and in a calm spirit. Do not lose your inner peace for anything whatsoever, even if your whole world seems upset.” “God takes pleasure to see you take your little steps; and like a good father who holds his child by the hand, He will accommodate His steps to yours and will be content to go no faster than you. Why do you worry?”