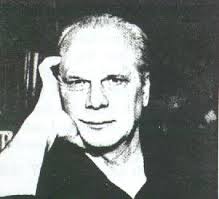 The real superhuman, man or woman, is the person who’s rid himself of all prejudices, neuroses, and psychoses, who realizes his full potential as a human being, who acts naturally on the basis of gentleness, compassion, and love, who thinks for himself and refuses to follow the herd.

Philip José Farmer, Sun Aquarius, Moon Cancer, American writer (26 January 1918-d. 2009), science-fiction. His work often contains sexual freedom themes, such as Stranger in a Strange Land (1961), Night of Light (1966), Image of the Beast and the sequel Blown and religious elements. His main series are Riverworld and World of Tiers, set within a number of artificially constructed parallel universes.

Robert Lazar, or Bob Lazar (11.5) Sun Aquarius, Moon Leo, (born January 26, 1959, claims to have worked from 1988 until 1989 as a physicist at an area called S-4 (Sector Four), allegedly located near Groom Lake, Nevada, at the location also known as Area 51. According to Lazar, S-4 served as a hidden military location for the study and possible reverse engineering of extraterrestrial flying saucers. Lazar says he saw nine different discs there and provides details on their mode of propulsion.

Gospel of Thomas: (18) The disciples said to Jesus, “Tell us how our end will be.” Jesus said, “Have you discovered, then, the beginning, that you look for the end? For where the beginning is, there will the end be. Blessed is he who will take his place in the beginning; he will know the end and will not experience death.”

ACIM: 26. My attack thoughts are attacking my invulnerability.

Concise Epitome: 3.10 This caused a constant climax of ecstasy and luminosity which was so…. Well, we give up any attempt to describe that! (Codesta congiuntura cagionò una lucentezza e una coscienza estatica di tale immensità che… Perdiana! Ci difettano proprio le parole per descriverla.)