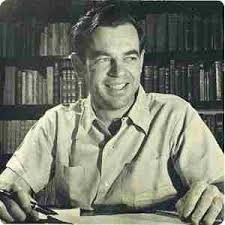 Follow your bliss and doors will open where there were no doors before.

If you can see your path laid out in front of you step by step, you know it’s not your path. Your own path you make with every step you take. That’s why it’s your path.

Joseph John Campbell: born on 26 March 1904, in White Plains, NY, with Sun in Aries, Moon in Leo and Ascendant in Libra, is one of the major relevant academic authorities in the realm of mythology and a most erudite, yet accessible, lecturer. In his acclaimed work The Hero with a Thousand Faces, Campbell describes universal patterns that are common to heroic tales in every culture. He refers to myths from several sources illustrating the hero’s path through rites of passage to final transformation. In his work , he writes: “Read myths. They teach you that you can turn inward, and you begin to get the message of the symbols. Read other people’s myths, not those of your own religion, because you tend to interpret your own religion in terms of facts – but if you read the other ones, you begin to get the message. Myth helps you to put your mind in touch with this experience of being alive. Myth tells you what the experience is.”

Every religion is true one way or another. It is true when understood metaphorically. But when it gets stuck in its own metaphors, interpreting them as facts, then you are in trouble.

I don’t have to have faith, I have experience.

Life is without meaning. You bring the meaning to it. The meaning of life is whatever you ascribe it to be. Being alive is the meaning.

The big question is whether you are going to be able to say a hearty yes to your adventure.

We must be willing to get rid of the life we’ve planned, so as to have the life that is waiting for us.

What each must seek in his life never was on land or sea. It is something out of his own unique potentiality for experience, something that never has been and never could have been experienced by anyone else.

When people get married because they think it’s a long-time love affair, they’ll be divorced very soon, because all love affairs end in disappointment. But marriage is a recognition of a spiritual identity.

When you make the sacrifice in marriage, you’re sacrificing not to each other but to unity in a relationship

Richard Saul Wurman (born March 26, 1935) American architect and graphic designer, creator of the TED conference (a non-profit media organization which posts talks online for free distribution, under the slogan “ideas worth spreading), the EG conference, TEDMED and the WWW suite of gatherings.

ACIM: 85. My grievances hide the light of the world in me.  My salvation comes from me.

Concise Epitome: 9.8 “Serious? What does it signify? (Cupi? Cosa significa?)