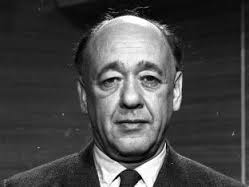 “It is our own mediocrity that makes us let go of love, makes us renounce it. True love doesn’t know the meaning of renunciation.”

(Eugène Ionesco, born on 26 November 1909, Sun and Ascendant in Sagittarius, Moon in Taurus)

Eugène Ionesco, Romanian-born French playwright (26 November 1909-d. 1994) double Sagittarius (Sun and Ascendant in Sagittarius) and Moon in Taurus, the chief exponent of the Theatre of the Absurd, a movement aimed at exposing the pointlessness of consensus reality with all the related human separation and estrangement. Despite the apparent seriousness, nihilism and pessimism of this approach, Ionesco’s works abound with humour and vitality. “All my plays” he says “have their origin in two fundamental states of consciousness: now the one, now the other is predominant, and sometimes they are combined. These basic states of consciousness are an awareness of evanescence and of solidity, of emptiness and too much presence, of the unreal transparency of the world and its opacity, of light and of thick darkness.” La Cantatrice chauve (The Bald Soprano), his first play, consists mainly of meaningless conversations between two couples that eventually deteriorate into babbling. The work was inspired by the repetitive and nonsensical phrases of Ionesco’s textbook while attempting to learn English.

“I am not quite sure whether I am dreaming or remembering, whether I have lived my life or dreamed it. Just as dreams do, memory makes me profoundly aware of the unreality, the evanescence of the world, a fleeting image in the moving water.”

“Ideologies separate us. Dreams and anguish bring us together.”

“No society has been able to abolish human sadness, no political system can deliver us from the pain of living, from our fear of death, our thirst for the absolute. It is the human condition that directs the social condition, not vice versa.”

“There is nothing truer than myth: history, in its attempt to “realize” myth, distorts it, stops halfway; when history claims to have “succeeded,” this is nothing but humbug and mystification. Everything we dream is “realizable.” Reality does not have to be: it is simply what it is.”

Bill Wilson, (9.12) American co-founder of Alcoholics Anonymous (26 November 1895-d. 1971). Best known as a synthesizer of ideas the man who pulled together various threads of psychology, theology, and democracy into a workable and life-saving system. Aldous Huxley called him “the greatest social architect of our century,”and Time magazine named Wilson to their Time 100 List of The Most Important People of the 20th Century.

“In God’s economy, nothing is wasted. Through failure, we learn a lesson in humility which is probably needed, painful though it is.”

“Because of our kinship in suffering, our channels of contact have always been charged with the language of the heart.”

“Years ago I used to commiserate with all people who suffered. Now I commiserate only with those who suffer in ignorance, who do not understand the purpose and ultimate utility of pain.”

“Believe more deeply. Hold your face up to the Light, although for the moment you do not see.”