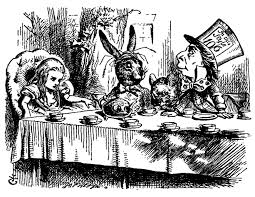 Lewis Carroll, born 27 January 1832, Sun in Aquarius, Moon and Ascendant in Sagittarius, died 1898, English author, mathematician, Anglican deacon and photographer. Best known for Alice’s Adventures in Wonderland and its sequel Through the Looking-Glass, the poems “The Hunting of the Snark” and “Jabberwocky”, examples of the genre of literary nonsense. “One of the deep secrets of life is that all that is really worth the doing is what we do for others.”

John Collier, British writer and painter (27 January 1850-d. 1934). He painted in the Pre-Raphaelite style, and was one of the most prominent portrait painters of his generation.

Gospel of Thomas: (19) Jesus said, “Blessed is he who came into being before he came into being. If you become my disciples and listen to my words, these stones will minister to you. For there are five trees for you in Paradise which remain undisturbed summer and winter and whose leaves do not fall. Whoever becomes acquainted with them will not experience death.”