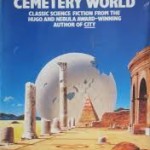 You travel back along the line of time and you don’t find the past, but another world, another bracket of consciousness. The earth would be the same, you see, or almost the same. Same trees, same rivers, same hills, but it wouldn’t be the world we know. Because it has lived a different life, it has developed differently. The second back of us is not the second back of us at all, but another second, a totally separate sector of time. We live in the same second all the time. We move along within the bracket of that second, that tiny bit of time that has been allotted to our particular world.

It would seem to me that by the time a race has achieved deep space capability it would have matured to a point where it would have no thought of dominating another intelligent species. Further than this, there should be no economic necessity of its doing so.

Out of the nothingness of sleep,
The slow dreams of Eternity,
There was a thunder on the deep:
I came, because you called to me.
‘ll break and forge the stars anew,
Shatter the heavens with a song;
Immortal in my love for you,
Because I love you, very strong.

Your mouth shall mock the old and wise,
Your laugh shall fill the world with flame,
I’ll write upon the shrinking skies
The scarlet splendour of your name,

Till Heaven cracks, and Hell thereunder
Dies in her ultimate mad fire,
And darkness falls, with scornful thunder,
On dreams of men and men’s desire.

Then only in the empty spaces,
Death, walking very silently,
Shall fear the glory of our faces
Through all the dark infinity.

So, clothed about with perfect love,
The eternal end shall find us one,
Alone above the Night, above
The dust of the dead gods, alone.

Robert Thurman (5.9) born August 3, 1941, American Buddhist writer and academic who has written, edited or translated several books on Tibetan Buddhism; the Je Tsongkhapa Professor of Indo-Tibetan Buddhist Studies at Columbia University, holding the first endowed chair in this field of study in the United States; the co-founder and president of the Tibet House New York. Time chose Robert Thurman as one of the 25 most influential Americans of 1997.