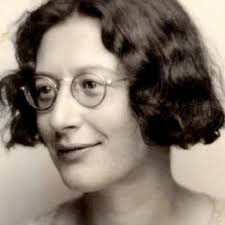 Do not allow yourself to be imprisoned by any affection. Keep your solitude. The day, if it ever comes, when you are given true affection, there will be no opposition between interior solitude and friendship, quite the reverse. It is even by this infallible sign that you will recognize it.

Simone Weil, born on 3 February 1909, Sun Aquarius, Moon Cancer, Ascendant Sagittarius, French philosopher, Christian mystic and social activist (d. 1943), (11.4.9).
“Liberty, taking the word in its concrete sense, consists in the ability to choose.”
“A beautiful woman looking at her image in the mirror may very well believe the image is herself. An ugly woman knows it is not.”
“Attachment is the great fabricator of illusions; reality can be attained only by someone who is detached”
“There is something else which has the power to awaken us to the truth. It is the works of writers of genius. They give us, in the guise of fiction, something equivalent to the actual density of the real, that density which life offers us every day but which we are unable to grasp because we are amusing ourselves with lies.”
“All the natural movements of the soul are controlled by laws analogous to those of physical gravity. Grace is the only exception. Grace fills empty spaces, but it can only enter where there is a void to receive it, and it is grace itself which makes this void. The imagination is continually at work filling up all the fissures through which grace might pass.”
“Do not allow yourself to be imprisoned by any affection. Keep your solitude. The day, if it ever comes, when you are given true affection, there will be no opposition between interior solitude and friendship, quite the reverse. It is even by this infallible sign that you will recognize it.”
“To claim that theft or adultery or lying are “evil” simply reflects our degraded idea of good-—that it has something to do with respect for property, respectability, and sincerity.”

Steven Peter Stapleton (11.12) born 3 February 1957 in Finchley, London is a British musician and the only constant member of experimental improv outfit Nurse with Wound. Gnostic themes are present in his albums, such as in Nurse With Wound (Thunder Perfect Mind).

Billy Meier, (11.7) Swiss ufologist 3 February 1937. the source of many controversial UFO photographs, he reports regular contact with extraterrestrial beings called the Plejaren (aliens from beyond the Pleiades) describing them as humanoid Nordic aliens.

ACIM: 34. I could see peace instead of this.

Concise Epitome: 4.3 Nobody had ever ruminated of moving beyond the Last Frontier. And that was actually the reason why it was named the Last Frontier. To the further side of that, there was nothing at all and one could not even conceive the idea of proceeding beyond. (Nessuno aveva mai concepito sopravanzare la Frontiera. Del resto era proprio questa la cagione per cui si denominava l’Ultima Frontiera. Oltre quella zona non c’era niente, ed era impensabile l’idea di ambulare a farci qualcosa.)